Ajinkya Rahane and MS Dhoni have shared a 73-run partnership for the seventh wicket.

India have got a lead of 109 runs over New Zealand as they enter tea on Day Two of the second Test in Wellington on February 15, 2014. India are at 301 for six with Ajinkya Rahane batting on 64 and MS Dhoni on 39.

The duo have added 73 runs off 95 deliveries for the seventh wicket in India’s first innings. Virat Kohli was the only man dismissed in the second session on Day Two for 38. The session began with India at 201 for five.

Corey Anderson bowled a wide to Kohli first up after lunch as India got under way in the second session on Day Two. James Neesham bowled a full-toss and Rahane edged it in-between the second slip and gully for a four.

Neesham bowled a half-volley and Kohli simply pushed it down the ground slightly towards long-on for a four. Neesham then bowled one short and Kohli went for the pull. There was a noise as wicketkeeper BJ Watling collected the ball directly.

The New Zealand players appealed for caught-behind, but the umpire ruled it not out. Replays showed that the ball had struck Kohli on the side of the hip. Neil Wagner came from round the wicket and found the edge of Rahane’s bat. The ball again went through the slips for a four.

Wagner got the breakthrough by dismissing Kohli for 38 off 93 deliveries. He came from round the wicket and pitched one full outside off-stump. Kohli hit the ball straight to Hamish Rutherford at short extra-cover.

Dhoni was the new man in, but lightened up the scoring by smashing four fours in-a-row off Wagner. The first was a drive through covers. The second was a pull shot as the ball raced away for a four in front of square on the leg side.

The third was a cut shot through point. The fourth was hit slightly in the air down the ground. Wagner was obviously not happy with that and tried to sledge. Dhoni simply smiled back.

After those four fours, the scoring became a bit slow as New Zealand captain Brendon McCullum kept a spread-out field. But Neesham bowled a short and wide delivery and Dhoni cut it over backward-point for a four.

Rahane then reached his half-century with a single towards point. This is Rahane’s third half-century in Test cricket. Trent Boult was brought into the attack as soon as the second new ball was taken after 80 overs. He was on the money, but as soon as he strayed outside off-stump, Dhoni smashed the ball in the air for a four towards extra-cover.

Boult the found the outside edge of Rahane’s bat, but the ball went through the slips for a four. That took India’s lead to the 100-run mark. Tim Southee bowled an out-swinger and Rahane pushed it through cover for a four. Tea was soon take and India led by 109 runs. 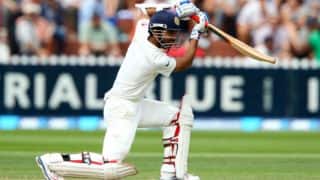