Hardik Pandya has been named in the one-day squad to face New Zealand A, which is led by Manish Pandey.

Ajinkya Rahane has been named captain of an India A squad to face New Zealand A for the first four-day match in mid-November, which includes Rohit Sharma, Murali Vijay and Prithvi Shaw.

Also named in the 15-man squad is Parthiv Patel, who along with Vijay was on Friday named in India s Test squad for the tour of Australia next month, and Hanuma Vihari who made his Test debut in England.

Mayank Agarwal, who was dropped from India s Test squad, has been named in the four-day A squad. Shahbaz Nadeem and K Gowtham are the spinners, with Mohammed Siraj, Navdeep Saini, Deepak Chahar and Rajneesh Gurbani forming the pace quotient. Andhra wicketkeeper-batsman KS Bharath and Tamil Nadu allrounder Vijay Shankar have also been included.

India play the first Test against Australia in Adelaide from December 6.

Manish Pandey leads the A squad for the one-day matches against New Zealand A, with Jharkhand captain Ishan Kishan chosen as the wicketkeeper. Agarwal features here too, as do Shreyas Iyer, Washington Sundar, Krunal Pandya and Khaleel Ahmed who are all part of India s latest T20I squads.

Hardik Pandya, who suffered a back injury during the Asia Cup in September, has been named in the one-day squad but not in India s Test squad. 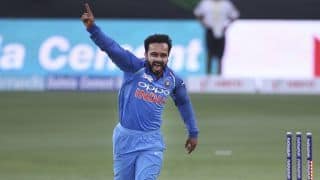