On October 7, the 31-year old Rahane posted an adorable picture of his newborn baby along with his wife Radhika.

Team India’s batting mainstay in the longer format – Ajinkya Rahane has finally shared the first picture of his little princess on Wednesday. On his official Instagram account, Rahane posted the photo of the newborn baby along with the caption reading her name – “Aarya Ajinkya Rahane”.

With his eyes firmly set to make the most of his good batting form in the upcoming two-match Test series versus Bangladesh, Rahane had recently shared snippets from his gruelling training session.

On October 7, the 31-year old Rahane posted an adorable picture of his little girl along with his wife Radhika to share the heartwarming news with his fans. Rahane captioned the picture with “hello” and a red heart emoji.

Rahane married his childhood friend Radhika in 2014. The two had met first in school and remained friends for quite some time before their parents met and arranged their marriage.

During the South Africa Test series, the India vice-captain ended a 3-year-long wait to score a Test century on home soil. The last time he scored a hundred in the whites at home was also against the same opposition way back in 2015.

He smashed his 11th Test hundred (in Ranchi) in the longer format which included 14 boundaries and one six.

In the three-match Test rubber versus Proteas, Rahane conjured up 216 runs in 4 innings to script another memorable series whitewash for the Indian team. 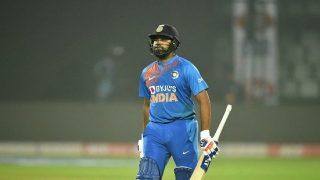