Ajinkya Rahane injured his right hand while fielding during the fourth ODI between India and Australia at the Manuka Oval in Canberra on Wednesday.

Ajinkya Rahane injured his right hand while fielding during the fourth One-Day International (ODI) between India and Australia at the Manuka Oval in Canberra on Wednesday. The ace Indian fielder tried to stop a ball that was struck hard by the batsman. As a result he split the webbing on his right hand and immediately walked off the field. Rahane needed four stitches, and will possibly miss out on the fifth ODI as well as the Twenty20 International (T20I) series that will follow. However, his prolonged absence is yet to be confirmed. As per reports Rahane will bat only if needed. Live Cricket Scorecard: India vs Australia 2015-16, 4th ODI at Canberra

Earlier, the Australian batsmen led by Aaron Finch, David Warner, Steven Smith, and Glenn Maxwell heaped on the runs as Australia scored a commanding 348 for 8. Finch scored 107, Warner hit 93, Smith made 51, and Maxwell smashed 41. Ishant Sharma and Umesh Yadav bowled well in the death but their figures suffered at the hands of Smith and Maxwell, who batted exceedingly well in the face of some good bowling. Live Cricket Blog: India vs Australia 2015-16, 4th ODI at Canberra

Ishant finished with 4 for 77 and Umesh took 3 for 67 to help restrict Australia to under 350. At one stage when Finch and Warner were batting it seemed likely that Australia would cross the coveted 400-run mark. Rishi Dhawan and Ravindra Jadeja managed to keep things quiet in the middle overs, but Bhuvneshwar Kumar and Gurkeerat Singh failed to make much of an impact.

Australia won the toss and batted first for the first time in the series. Steven Smith and MS Dhoni both made one change each, with Australian off-spinner Nathan Lyon replacing the ineffective Scott Boland and young Indian left-arm seamer Barinder Sran sitting out in favour of medium-pacer Bhuvneshwar Kumar. 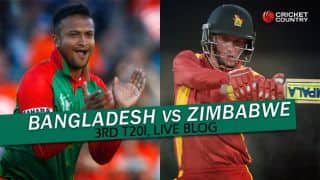