Rajasthan race to 22 for no loss in three overs.

Ajinkya Rahane took Rajasthan Royals off to a flying start chasing a meagre 70 in the 14th match of the Indian Prremier League against Royal Challengers Bangalore.

Chasing  a meager total of 70, Ajankya Rahane took Rajasthan Royals off to a flying start with his flashy cut shots in full-display against with Karnataka youngster Karun Nair giving him good support at the crease. Ravi Rampaul bowled a tidy over which almost got him Karun’s wicket. Rahane though was in fantastic form, playing a gorgeous cover drive and pulling starc for a boundary. R

Rajasthan Royals ran through the Royal Challengers Bangalore in the 14th match of Indian Premier League (IPL) 2014, to bowl them out for a meager 70 in 15 overs thanks to some clinical bowling from Kane Richardson and co.Pravin Tambe was the pick of the bowlers with four wickets for 20 runs and Kane Richarson claimed two wickets for 18 as Rajasthan produced an emphatic display with the ball in the 14th match of IPL 7 at Abu Dhabi. 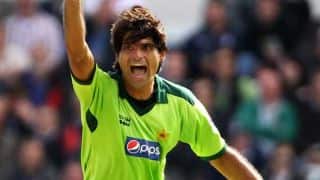