Ajinkya Rahane struck a brilliant 70 to guide Rajasthan Royals to 159 for eight in their 20 overs against the Chennai Super Kings (CSK) in the first semi-final clash of the Champions League T20 (CLT20) 2013 at the Sawai Mansingh Stadium in Jaipur on Friday. 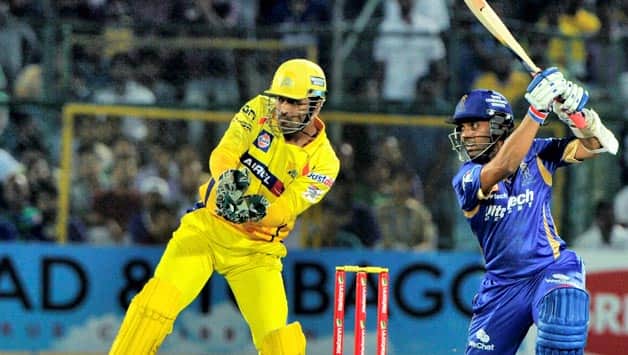 Ajinkya Rahane struck a brilliant 70 to guide Rajasthan Royals to 159 for eight in their 20 overs against the Chennai Super Kings (CSK) in the first semi-final clash of the Champions League T20 (CLT20) 2013 at the Sawai Mansingh Stadium in Jaipur on Friday.

Rahane struck six sublime boundaries and two massive sixes in his 56-ball knock to put Rajasthan in a comfortable position in the crucial encounter.

The Sawai Mansingh Stadium, for a change, witnessed a good crowd as the two Indian Premier League (IPL) sides were set to play in what could possibly be Rahul Dravid’s last competitive match.

Mahendra Singh Dhoni, who was leading a T20 side for the 100th time in India, won the toss and elected to field. With due expected to play a role in the match, Dravid too admitted that they would’ve opted to field had they won the toss.

Although the pitch was devoid of grass, it was hard and quick with the ball coming on quickly to the bat. Taking that into account, Chennai brought in Chris Morris in place of his countryman Albie Morkel.

Rajasthan, on the other hand, replaced Ashok Menaria with Dishant Yagnik.

Dhoni opened the bowling with Jadeja, who had a poor outing in the tournament. However, the move didn’t work for Chennai as Rahane danced down the track off the fifth ball to hit a beautiful straight six. While Rahane was playing sublime shots, his opening partner Dravid wasn’t too far away as he displayed vintage class while playing a square drive off Mohit Sharma in the second over. However, his stay at the crease was short as Morris broke through his defence with a yorker.

Rajasthan experimented by promoting Kevon Cooper. He smashed two boundaries and a six of Mohit Sharma’s second over before giving a catch to Suresh Raina at covers. However, Rahane continued scoring runs off proper cricketing shots. During the course of the match, he crossed 2,000 T20 runs. He brought up his half-century in 41 balls. He became the second player after Michael Klinger to slam three consecutive half-centuries in the tournament.

With the match played on Pitch No 4, the same in which Otago Volts had scored 242 against the Perth Scorchers, Rajasthan too showed the intent of scoring big. In the process, Sanju Samson and Rahane, in particular, played uncharacteristic shots on the up. In the six overs of Powerplay, they were 42 for two. However, after two early setbacks, Rahane and Samson consolidated the innings with an 33-run partnership for the third wicket. Mid-way through the innings, the home side had reached 71 for the loss of three wickets.

Surprisingly, Dhoni didn’t introduce Ravichandran Ashwin before the 12th over. Proceedings didn’t start off well for Ashwin as he started off with a wide ball. Soon Rahane took him on and smashed two consecutive boundaries, before Ashwin missed his line again and bowled two more wide deliveries.

By the 15th over, Shane Watson was in his elements as he muscled his way to a 23-ball 32, setting a perfect platform for the lower middle order to flourish.

However, the home side struggled towards the end as they lost wickets at regular intervals and eventually reached a total that wouldn’t be easy to defend given the conditions and the opposition. The last five overs yielded 38 runs at the cost of five wickets.