The first of the five-match ODI series was abandoned due to persistent rain.

In the second match of the five-match ODI series between India and West Indies, rain led to delayed start and reduced the game to 43 overs per side. Nonetheless, India made light work of an ordinary West Indies bowling once proceedings commenced. Opting to bowl, Jason Holder’s side toiled for 19 overs to earn the first breakthrough as Shikhar Dhawan and Ajinkya Rahane looked at ease. Dhawan’s departure led to the mantle being shifted to Rahane, and the right-hander responded by slamming his third ODI century. The late flourish, amidst few tight overs, was provided by skipper Virat Kohli as India ended at 310 for 5 in 43 overs.

West Indies learnt nothing from their past encounters and failed to take early wickets. They were timid in their approach and allowed the Indian openers to settle and dictate terms. Boundaries came at will as Alzarri Joseph and Holder were taken to the fence. On the other hand, Ashley Nurse and Devendra Bishoo were employed, but the move resulted in no success. Dhawan was playing his shots by resorting to timing, rather than power. His body balance and hand-eye coordination produced some crackling shots. Rahane, on the other hand, also gave ample support and struck boundaries from time to time.

Nonetheless, a stumping, off Nurse, triggered in Dhawan’s dismissal for 63. Kohli and Rahane ensured that runs kept coming, with the latter being more aggressive. Rahane presented a straight bat to over-pitched deliveries and smacked well-timed pulls off short balls. He notched up his third ton, first against West Indies, and became the second Indian opener to register three-figures on Caribbean soil. However, he perished soon in order to up the ante.

Hardik Pandya was promoted up the order to accelerate. However, the all-rounder fell for 4. Kohli looked in his elements, with some lovely drives, late cuts and flick of the wrist, but lost Yuvraj for 14. The skipper’s 66-ball 87 held the innings at the back end. Hosts pulled things back to some extent by hitting the deck before Holder’s forgettable last over propelled India over 300. They will have to bat wisely to chase 311 in 43 overs. 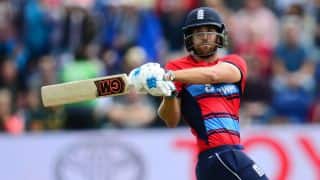