This is the first time Ajinkya Rahane has scored two centuries in a Test match.

India have declared at 267 for 5 on Day Four of the fourth Test against South Africa, thereby setting South Africa a target of 481 to win the match. Ajinkya Rahane remained unbeaten on 100, which was his second century of the match. Rahane had scored 127 in the first innings and has followed it up another classy century in the second innings as well. Rahane therefore becomes the fifth Indian player to score twin centuries in a Test after Sunil Gavaskar, Rahul Dravid, Virat Kohli and Vijay Hazare. South Africa managed to pick up just one wicket in the first session of the day in the form of Kohli at 88. Live Cricket Scorecard: India vs South Africa 2015 4th Test at Delhi

Rahane upped the ante today as India were looking to force a declaration and setting South Africa a huge score. They have done exactly that and they now need to break the world record to win the match. India will look to wrap up the match by the end of the day and register a huge win against South Africa in the series once again. The Kohli-Rahane partnership is the highest partnership of the series, surpassing the 98-run stand between Rahane and Ashwin in the first innings. Live Cricket Updates: India vs South Africa 2015 4th Test, Day 4 at Delhi

South Africa will now look to bat out the session as there are another 20 minutes or so to go in the session. India on the other hand will look for a quick breakthrough. South Africa managed to pick up just the wicket of Kohli in the first session, who missed out on his 12th Test ton by 12 runs. Wriddhiman Saha added 50-plus runs with Rahane, which consolidated India’s position in the match.

India, courtesy of Rahane and a half-century by Ravichandran Ashwin scored 334 in their first innings. They secured a 213-run lead as they bowled South Africa out for just 121. South Africa will have to chase a world record score in their fourth innings and their batsmen need to step up for them. India lead the series 2-0. 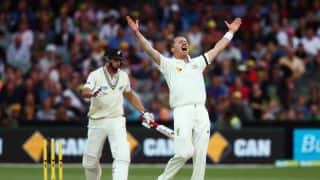 Video: And you thought Ben Stokes can only play cricket!