Part of Pant not being in the ODI set up thus far is the presence of MS Dhoni and second wicketkeeping option in Dinesh Karthik, who was part of India s victorious 2018 Asia Cup campaign.

After scoring an enterprising 92 off 84 balls against West Indies in the First Test at Rajkot on Firday, Rishabh Pant reaffirmed his credentials as a brisk scorer and former India pacer Ajit Agarkar believes that the 21-year-old should be given a chance to prove himself in the ODIs for India against West Indies.

I can t believe he is not part of the India s shorter format setup, Agarkar said during a show in ESPN cricinfo.

Part of Pant not being in the ODI set up thus far is the presence of MS Dhoni and second wicketkeeping option in Dinesh Karthik, who was part of India s victorious 2018 Asia Cup campaign.

While, Karthik did not really set the stage on fire in the Asia Cup, he batted well managing 30 plus scores four times in six matches. However, Pant, after cracking his debut Test hundred in England, has made a solid statement striking the ball at 109.52 in the first Test against West Indies, promoting Agarkar to opine that the 21-year-old should be picked ahead of Karthik and should get a couple of games against West Indies in ODIs, resting Dhoni.

Hopefully they do that (ODI for Pant) sooner, rather than later, against the West indies in the ODIs series, said Agarkar, adding, There are five ODIs and there will be opportunity to play him somewhere, whether as a batter or a wicketkeeper. I mean you know what Dhoni can do and there is no harm in resting him for couple of games .

He (Pant) is a good striker of the ball and looks like a batsman for all formats of the game, he looks the part, said the 55-year-old.

Agarkar went on to say that while Pant may have a hard time break in to the top three of the current Indian ODI setup, he can surely be part of the top-six, considering the fact that he will be the lone left-hander in the middle-order, if he plays.

In the top six, purely with his batting ability there no doubt in my mind that he has to be given the opportunity to see whether he is good enough. There is no left-hander (in the middle-order) and the way he strikes the ball, it is suited for any format.

Pant, part of India s U-19 team that made it to finals in 2016, has so far played four T20Is for India to go with his three Test appearances before the West Indies series. 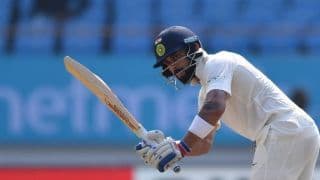