Former Pakistan Cricket Board (PCB) CEO Rafi Nasim has slammed Shoaib Akhtar s autobiography "Controversially Yours" and called it 'a pack of non-sense in which the author has tried to portray himself a great cricketer and a 'saint' while dubbing others as troublemakers. 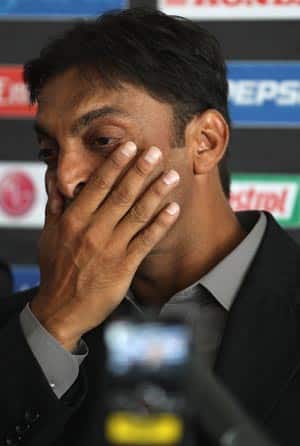 Former Pakistan Cricket Board (PCB) CEO Rafi Nasim has slammed Shoaib Akhtar s autobiography “Controversially Yours” and called it ‘a pack of non-sense in which the author has tried to portray himself a great cricketer and a ‘saint’ while dubbing others as troublemakers.

He said that Shoaib has achieved intentions of creating hype by dropping the bomb in world cricket the form of his book.

Ex- chief of PCB Nasim wrote in the Daily Times, “As far as I know, Shoaib was one of the most ill disciplined players that Pakistan cricket ever had.

“Coming to his biography, he perhaps thought that the book will receive all the praise and he will be showered with bouquets of flowers, but to his dismay, the reverse has happened.”

Nasim believes that by revealing many dressing room facts in his book, Shoaib has shown disloyalty towards Pakistan cricket.

“Such accusations on his own team members are not only unbecoming of a world renowned player like him, but also disloyalty to the game in general and Pakistan cricket in particular,” he added.

Colonel Nasim also ridiculed Shoaib s claim that former Pakistan captain Wasim Akram tried to ruin his career by dropping from the team as he felt insecure by Shoaib s talent. Nasim said that Wasim was already an established cricketer and a world-class bowler when Shoaib arrived in the national team, and that it was laughable to say a bowler of such caliber would feel insecure by Shoaib.

“Therefore, Shoaib could not possibly pose a threat to Wasim. If they could not pull along with each other it must be due to Shoaib’s misbehaviour,” he maintained.

The retired colonel added that by criticising former cricketers of Pakistan like Wasim Akram, Shoaib has proven himself to be “utterly mean” despite his international records for Pakistan.

Nasim further added that Shoaib’s book is a clear reflection of the player’s controversial nature, clearly indicating his lack of wisdom, maturity, diplomacy, loyalty with Pakistan, PCB, his teammates and the overall cricket world.

“Considering himself a saint he has downgraded everyone else in the field of cricket. There could not be a bigger fool than Shoaib who got the book co-authored by an Indian lady writer and asked an Indian publisher to release the volume which contained stark criticism of the Indian players whom the people of India literally worship,” he concluded.

I have Sachin Tendulkar's photo on my wall: Shahid Afridi

England will struggle to inflict a whitewash in India: Kapil Dev