Ashley Giles has said that Alastair Cook's form is a major concern going into the ICC World Cup 2015.

Former England spinner Ashley Giles has expressed concern over the form of Captain Alastair Cook ahead of the ICC World Cup 2015. Many former players like Darren Gough and Michael Vaughan have called for stepping down of Cook after the losing 5-2 to Sri Lanka in the recently concluded One-Day International (ODI) series.

“Cook simply isn’t playing that well,” said Giles.  “He is under pressure. He hasn’t been playing that well for a year and going into a World Cup your leader is important, but so is having 15 players in that squad who can perform and win games for England. I think there’s still some discussion to be had and from the sort of the whispers we’re hearing from the camp clearly they’re not 100% sure. He is desperate to do well but he is still not getting the output that he would or England would want,” said the Lancashire coach, reports sportsmole.co.uk.

But  Cook is defiant and says he will not step down as captain of the England side. Cook has represented his country in 86 ODIs and scored at an average of  37.62. 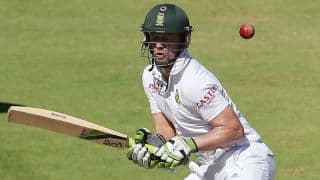