Alastair Cook and Matt Prior come to England's rescue again

Alastair Cook and Matt Prior come to England's rescue again

Alastair Cook and Matt Prior, who had the two highest scores for England in their first-innings collapse, came to the visitor's rescue once more as their team took Tea on Day Four at 264 for five, still trailing India by 66 runs. 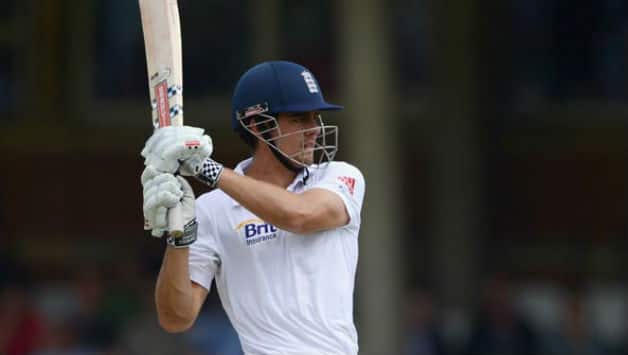 Alastair Cook and Matt Prior, who had the two highest scores for England in their first-innings collapse, came to the visitors’ rescue once more as their team took Tea on Day Four at 264 for five, still trailing India by 66 runs after being asked to follow on .

India pacer Umesh Yadav, who had so far been a silent spectator as the spinners picked up the wickets, finally had his day as he scalped Ian Bell (22) and Samit Patel (0) in back-to-back deliveries. Both fell in similar fashion, leg-before to Yadav s balls inching down leg-side, but good enough for umpire Tony Hill to think they would have clipped leg-stump.

Patel s dismissal was even more doubtful; replays showed that it even nicked the bat s edge before hitting the pad.

India would have felt they deserved their bit of luck, after a few decisions going against them on Day Three. The DRS debate was back on, as England lost half their side still trailing by 130 runs.

Cook (138 not out), who had stood like a rock at the non-striker s end while his teammates left his company one-by-one, was then joined by Prior (40 not out) who had top-scored for England in the first innings with 48.

Cook showed admirable temperament in building his innings of 138 off 267 balls, including 18 boundaries. Cook was patient with his shot-selection, playing with soft hands off his more educated backfoot, and punished any loose deliveries to the fence. He was the silver lining in this first of what would now seem like four long, gruesome Test matches in India for England. Playing the perfect captain s innings, he showed the rest of the team how to play the Indian tweakers on dust bowls and looks set to have another good tour of India after a successful debut series here six years ago.

India took the second new ball with England on 219 for five; Yadav got his hands on it again for the second time in this innings. But Cook and Prior stood firm and took England into lunch still five-down and within a shot of making India bat again.

Earlier in the day,Cook scored his 21st Test century and held fort to take England to 182 for three at Lunch on Day Four, while Pragyan Ojha began his journey through the English batting order.

After resuming his innings on 74 not out, Cook drove and cut the Indian spinners to become the first Test captain to score a century in his first three matches as skipper. The 27-year-old now has 21 Test hundreds; only Sachin Tendulkar, with 25 tons, had more at this age.

Pragyan Ojha, who picked up a fifer in the first innings but had had no luck so far in the second, then switched ends and seemingly also switched on, catching Jonathan Trott s (17) outside edge. MS Dhoni took a sharp catch behind the sticks and retributed for his missed stumping earlier on. The Indians had their first breakthrough at 123 for one.

Bell was next in, and he didn t commit hara kiri first ball this time. He kept Cook company for the 40 minutes left before the lunch break and prolonged India’s wait for that coveted victory.