Under-pressure skipper Andrew Strauss and fellow opener Alastair Cook hit gutsy half-centuries as England made a confident reply to Sri Lanka's 275 in the second Test in Colombo on Wednesday. 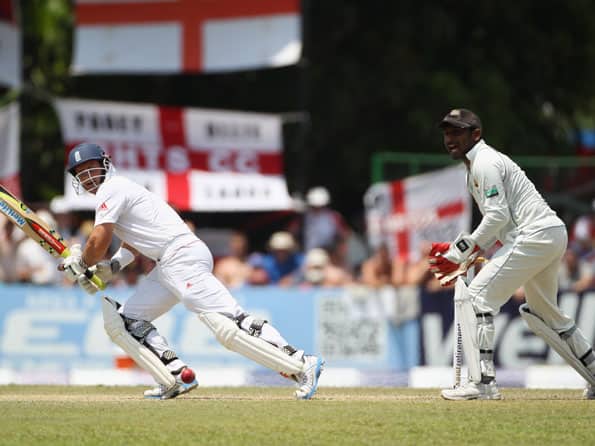 Under-pressure skipper Andrew Strauss and fellow opener Alastair Cook hit gutsy half-centuries as England made a confident reply to Sri Lanka’s 275 in the second Test in Colombo on Wednesday.

The left-handers compiled a 122-run partnership as England combated Sri Lanka’s pace and spin attack to reach 154-1 by stumps on the second day at the P. Sara Oval in Colombo.

Strauss, under fire for his batting and leadership skills, roared back to form with 61, before he attempted to cut off-spinner Tillakaratne Dilshan and edged a catch to the wicket-keeper in the final session.

It was his best score on England’s forgettable Asian sojourn so far this year, in which they were routed 3-0 by Pakistan in the United Arab Emirates before losing at Galle in the first Test.

Cook returned unbeaten on 77, but was fortunate to be still there after Lahiru Thirimanne floored a sharp chance at forward short-leg off Rangana Herath when the batsman was on 20.

Jonathan Trott was the other batsman at the crease, on 15, as the tourists trailed by just 121 runs on the first innings with nine wickets in hand.

England’s batting finally prospered in a match they must win to level the series and retain their number one ranking. Even a draw will see Strauss’ men slip to second spot behind South Africa.

Strauss showed no signs of strain after falling for 26 and 27 in the first Test, which Sri Lanka won by 75 runs to take the lead in the short two-match series.

But the England skipper’s dismissal against the run of play left him without a century in 24 innings and just one three-figure knock in his last 49 innings.

Strauss hit four boundaries, his only false shot before his dismissal coming on 23 when he edged Herath, but the ball fell just short of Mahela Jayawardene in the slips.

The openers resisted the temptation to play the dangerous sweep shot till the 39th over, when Strauss swept a wide ball from Suraj Randiv for a single, underlining the captain’s growing confidence.

As the batsmen pushed on, Cook was even emboldened to execute a reverse sweep off Herath which raced to the fence to bring up his 14th century partnership with Strauss.

Cook has so far hit seven boundaries, while Trott, who scored a century at Galle, looked solid as he played out the day.

Sri Lanka added 37 runs to their overnight score of 238-6 before they were all out 30 minutes before lunch.

Randiv helped his overnight partner Angelo Mathews add 31 for the seventh wicket before he holed out to Kevin Pietersen at long-on attempting a big shot off off-spinner Graeme Swann.

Swann struck again in his next over when he beat Mathews in the air and had him caught at short mid-wicket. Mathews scored 57 in a four-hour vigil at the crease.

Tim Bresnan had Herath edging a catch to wicket-keeper Matt Prior, before Swann terminated the innings by bowling last man Suranga Lakmal. (AFP)