"It has been really tough but I don t think this is the toughest defeat I ve had to bear"- Alastair Cook.

London: England Test skipper Alastair Cook, who led the side during its first Test defeat against Bangladesh, has said that it is not the toughest defeat he had to bear in his career. England, whose next assignment is in India, slid from 100 for none to 164 all out on the third day in Dhaka the first time they had lost all 10 wickets in a session since 1938. Chasing a target of 273, England seemed to be cruising when they reached 100-0 at tea on the third day with Cook unbeaten on 39 alongside Ben Duckett, 56 not out. ALSO READ: Mehedi Hasan rockets to 33rd place in ICC Test Ranking for bowlers after excellent show vs England

It s very easy sitting back and saying it s just Bangladesh, Cook was quoted as saying by the Guardian. But on spinning wickets their bowlers are good, they re experienced I know one of them is only 19 but he is experienced in these conditions and very good. It has been really tough but I don t think this is the toughest defeat I ve had to bear, he added.

Meanwhile, Bangladesh captain Mushfiqur Rahim said his team s historic Test win against England on Sunday was the beginning of a new era with the country now blessed with talent like teen sensation Mehedi Hasan.

England have just 10 days to regroup before the first Test in India, which begins in Rajkot from November 9. It would be a big task for Alastair Cook to re-instate the confidence in his team when they would take on the No.1 Test side, that too in their den. 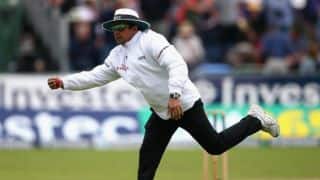 India vs England: How can Aleem Dar be withdrawn if he was not appointed, asks ICC 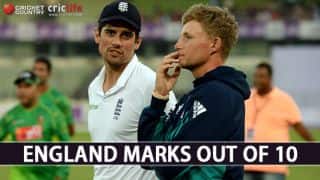