Alastair Cook: Being underdogs ahead of the Ashes 2015 helped us win

Alastair Cook: Being underdogs ahead of the Ashes 2015 helped us win

England lost the final Test at The Oval, but won the Ashes 3-2.

The barometer of England and Australian players and captains in the eyes of any fans are in the performance in the Ashes. As another of the iconic series ended, with a surprising result and many absorbing moments, England’s captain Alastair Cook emerged out of it a relieved man. Since the Ashes 2013-14 debacle, he has been burdened by scrutiny on his form and captaincy. Seeds of a turnaround appeared in the eventful Lord’s Test against New Zealand in May, but they were still underdogs against a powerful Australian side dominant in Tests and one-dayers. A corollary of it was that they played without pressure: Cook pointed this out after the final Test at The Oval, which, despite being lost, saw the urn being held by him.  Ashes 2015: Alastair Cook leads fightback against Australia in 5th Test

“I knew this was a talent group of players, I think being huge underdogs at the start helped us, it allowed us to go and play with freedom. It’s an amazing achievement to beat this Australia side, so it has to rank right up there [with the best],” Cook said at the post-match presentation.

The three Test wins were constructed by the exceptional performances by his seamers. At Sophia Gardens, at Edgbaston and at Trent Bridge, someone from the pace attack stepped up to provide a match-winning spell, most noticeably, by Stuart Broad in the fourth Test, and by Steven Finn, who returned to the Test side after two years, in the third. But otherwise, they have been outperformed by their opposition: Australian players lead the batting and bowling charts for the series. All the Tests were one-sided affairs and none lasted the fifth day. Alastair Cook admits to considering resignation as Test captain before Ashes 2015

“It’s been strange at times, two-day Test matches, but very pleasing.” What are the lessons for the youngsters in the team? “Learning the hard game of Test cricket as young players, it’s good for the future. It’s exciting, there’ll be tough times but look forward to grabbing those moments in the future.”

These moments have been pretty rewarding for Cook. The score-line has helped him make the right decision to prolong his stay at the helm, despite the reality check at The Oval. But even in this defeat, Cook’s dogged 85 displayed some resistance that would have helped him feel more deserving of holding aloft the urn.

“It’s been an interesting Test match, probably both sides have been a little bit off in terms of intensity, credit to Australia and their character to bounce back. You see how strong Australia were here, so to have beaten them three times – we played some really good cricket at times, the crowds have been absolutely amazing, so thanks to everyone.” 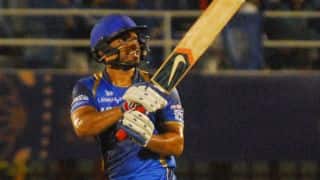 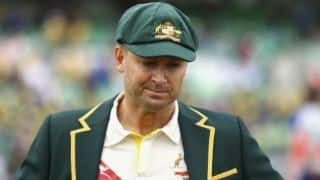