England were 82/0 at one stage and then collapsed to 227 all-out in 50 overs versus India.

England skipper Alastair Cook has blamed his batsmen for the six-wicket loss to India in the third One-Day International (ODI), saying that someone in the top order will have to score big for the others to make noteworthy contributions. The loss in second ODI came close on the heels of the 133-run (D/L) defeat in Cardiff as the visitors took a 2-0 lead in the five-match series.

“In one-day cricket, you can turn it around very quickly, but it starts with individual responsibility,” said Cook.

“It will take someone to score that hundred and everyone will jump on the back of that, you get 330 on the board and you win a game of cricket and it changes. That’s what we need and we need a top-order batter to do that.”

“With the platform of 80-odd for 0 after 16 or 17 overs you tend to get big scores. If you keep going at that rate and keep wickets in hand, you can catch-up later on. But you have to lay the platform in the right way,” Cook said.

The Indian spinners played their part as well sharing six wickets among them. R Ashwin led the way with a haul of 3-39 while Ravindra Jadeja, Suresh Raina and Ambati Rayudu took a wicket each as well.

“I don’t think anyone who looked at that wicket this morning thought it was going to turn as much as that. But no, we didn’t play the spin very well. Ashwin and Jadeja are very good at one-day cricket spin bowling. We had a few soft dismissals and a few good balls as well. Every time you tried to build a partnership, you lost wickets, and that obviously keeps holding you back if you want to play aggressively,” said the skipper.

The 2-0 scoreline now means that India cannot lose series after the first match in Bristol was abandoned without a ball being bowled due to incessant rain. The next two matches will be played in Birmingham (September 2) and Leeds (September 5).

“Yes, it is something we need to change around,” said Cook.

“When you play for England, you’re under pressure to perform. You keep looking 6-7 months away. We have mentioned the World Cup is there because it was the first time we’ve had a lot of one-day cricket to build up. We’re very clear in the dressing room that we’re trying to win the next game,” Cook signed off. 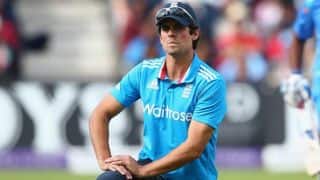