Cook was livid with his middle order for not building on the platform that he and Hales had built.

England captain Alastair Cook called on his batsmen to raise their game after a heavy defeat by India left them looking at another one-day series loss ahead of next year’s World Cup. India beat England by six wickets at Trent Bridge on Saturday to go 2-0 up in a five-match series with two to play.

It was the reigning world champions’ second crushing win of the week after a 133-run success in Cardiff on Wednesday followed Monday’s washout in Bristol. England yet again succumbed to spin after a promising opening stand between Cook (44) and Alex Hales (42), on his Nottinghamshire home ground, left them well-placed at 82 without loss.

But when Hales was caught behind sweeping at Suresh Raina, it was the first of three wickets England lost — all to spinners – for just 15 runs, with Cook and Joe Root (two) both stumped by India captain and wicketkeeper Mahendra Singh Dhoni.

England never recovered and were all out for a meagre 227, with India off-spinner Ravichandran Ashwin winning the man-of-the-match award for a return of three for 39.

India then cruised to victory in making 228 for four with seven overs to spare as Ambati Rayudu — only playing because of Rohit Sharma’s tour-ending finger injury — top-scored with 64 not out.

“In one-day cricket, it is funny: you can turn it around very quickly, but it starts with individual responsiblity,” Cook said.

“I know that’s a bit of a cliche, but it will take someone to score that hundred and everyone will jump on the back of that, you get 330 and you win a game of cricket and it changes,” added Cook, who has now gone 37 innings since scoring the last of his five ODI centuries in June 2012.

England, with the World Cup in Australia and New Zealand starting in February, have now lost four of their last five ODI series, excepting a one-off victory against non-Test nation Scotland.

“It is frustrating we are not playing to standards we know we are capable of, and need,” said Cook.

“There are some good players there, who are not showing it. It’s something we need to change around,” he insisted ahead of Tuesday’s fourth ODI at Edgbaston.

Cook, who this week faced repeated calls from retired former England team-mate Graeme Swann to quit one-day cricket because of an insufficiently quick run-rate, insisted a lack of top-order dynamism was not the issue.

“Everyone keeps talking about more power at the top. (But) we were 50 odd off 10 overs the other day, 50 off nine — we’re getting good starts.

Meanwhile Dhoni praised the versatility of Ajinkya Rahane, who made 45 after being promoted to open in Rohit Sharma’s absence.

“Apart from being a middle-order batsman he is also someone who will have to open if the team needs him to do that,” Dhoni said.

He was also delighted by a sharp all-round fielding display — exemplified by Mohit Sharma’s direct hit run out of Ian Bell — which bore no relation to the often sluggish efforts India produced during their 3-1 Test series defeat by England earlier on this tour. 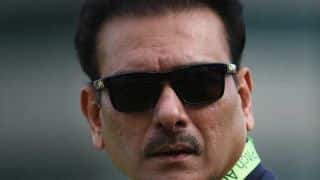 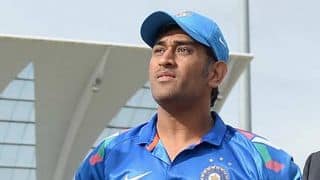