Alastair Cook has reached this feat in his 29th Test.

England captain Alastair Cook completes 2,000 runs against Australia at The Ashes during the fourth Test at Trent Bridge. Cook made 43 in the first innings, helping his side establish a lead over Australia after the visitors were bowled out for just 60 in their first innings. Cook came out to open the innings with Adam Lyth and has gone past the 2,000-run mark in his 29th match. His highest score however remains 235. Cook has been in decent form of late, but a big score has eluded him. Cook is the leading run-getter for England and the only English layer to have scored over 9,000 runs. Live Blog: England vs Australia, The Ashes 2015, 4th Test Day 1

England go into this match with a  2-1 lead and a win in this match will seal the series with s match still to spare. England lost their previous Ashes series 5-0 Down Under. A series win will somewhat avenge the humiliating loss they suffered in the previous series. Cook, who was under some pressure in the summer has performed well against West Indies, New Zealand and now against Australia. Live Scorecard: England vs Australia, The Ashes 2015, 4th Test Day 1

England had earlier won the toss and elected to bowl first. Both teams made once change each. England were forced to make a change as James Anderson was injured in the previous match. Mark Wood, who missed out in the previous Test due to injury takes Anderson’s place. Australia roped in Shaun Marsh instead of Mitchell Marsh. 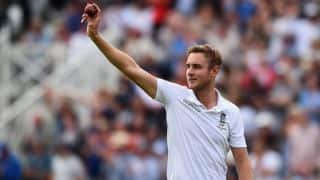