England were 148 for three after 34 overs, having taken their second innings lead to 387 runs.

England captain Alastair Cook completed his 36th half-century in Test cricket, during the fourth day of the third Test against India at Southampton. England were 148 for three after 34 overs, having taken their second innings lead to 387 runs.

Ian Bell was dismissed for 23 on the fourth day of the third India-England Test match at Southampton. Ravindra Jadeja bowled the right-handed batsman around the legs. England reached 109 for three after 27 overs, taking their second innings lead to 348 runs. Gary Ballance was out at the stroke of lunch. 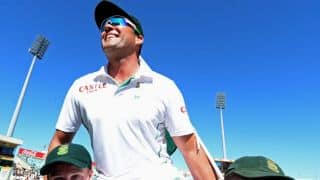