Cook would take on the field 50th time as captain of England in whites and would like to have a memorable outing as both captain and player.

England‘s Test skipper, Alastair Cook, is set for his 50th Test as captain when England take on the field versus Pakistan in the second Test starting from July 22 at Manchester. Trailing 0-1 in the four-Test series after losing the Lord’s Test, Cook and his team would like to stage a comeback in the series before it gets too late for them. James Anderson, Ben Stokes and Adil Rashid are most likely to stage a comeback for their team in the second game of the series. England have dropped Steve Finn and last match’s debutant, Jake Ball from their squad and revised their squad to 12. Full Cricket Scorecard: England vs Pakistan 2016, 2nd Test at Old Trafford

Cook would take on the field 50th time as captain of England in whites and would like to have a memorable outing as both captain and player. Cook scored 81 in the first innings of the Lord’s Test but only managed 8 runs in the second outing, getting out to Mohammad Aamer and Rahat Ali respectively. He would like to lead from the front and be in control of his game but take his team past the finish line this time. READ: Yasir best leg-spinner since Warne: Stokes

In the list of most matches as Test captain for England, Cook currently stands at the fourth position behind Micheal Atherton (54), Micheal Vaughan (51) and Andrew Strauss (50) with 49 matches as skipper, leading them to victory on 21 occasions whereas on the team has lost 16 matches under him. He has a win percentage of 42.85 % and would like to improve on that in future matches. 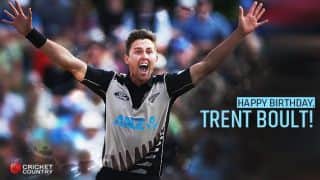