The comprehensive defeat in the first Test notwithstanding, England skipper Alastair Cook on Thursday sounded optimistic about turning around his team's fortunes in the second match against India, starting on Friday. 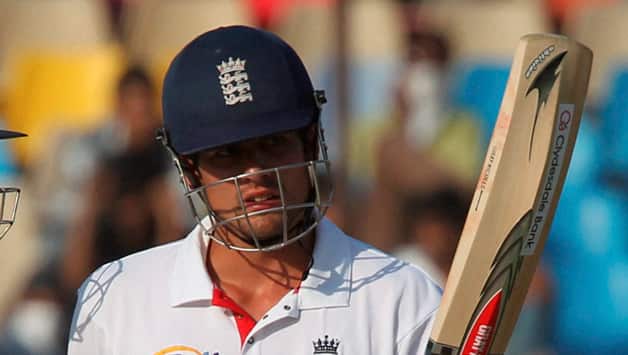 The comprehensive defeat in the first Test notwithstanding, England skipper Alastair Cook on Thursday sounded optimistic about turning around his team’s fortunes in the second match against India, starting on Friday.

“Clearly it was tough on confidence when you get beaten in a heavy manner. The beauty of the game is such quick turnaround. Now we have got the chance and the opportunity to try and put it right. That is what we will have to do. We have to try and learn from last week and play well,” Cook said.

Left-handed opener, Cook, was among the few from the touring party to come out of the disastrous first Test with his head held high, scoring a marathon 176 in the second innings, which kept England afloat till the last day.

Cook said he and his teammates have talked about the importance of scoring big in the first innings on Indian pitches. They were bowled out for 191 on a dusty Motera track in Ahmedabad.

“The first innings run is vital. We know that. I spoke about it when we lost the game and I have been speaking about it ever since. We know how important that is. We have got an opportunity now and a brand new situation. Whether you win or lose, you start on a level playing field straight away. We are going to try and use that to our advantage.

“We have good players. We have some world class players with fantastic records. We have to hold our hands up in these conditions, we haven’t played well enough. There is no one else to blame,” he said in the pre-match press conference.

Though reluctant to name the playing XI, with Ian Bell not available having returned home for personal reasons, Cook said the aim was to pick a team that could trouble the hosts.

“I am not going to name the team now. But we will try and pick a team that will trouble (India). Ian Bell is not with us. We are going to miss his experience but it gives someone else the opportunity to show the selectors and show us what he can do. He has got an opportunity to grasp and if he takes it then there is competition for the place.”