Alastair Cook was dismissed for 46 off 64 balls as Suresh Raina had him caught by MS Dhoni in the in the fifth One-Day International (ODI) at Headingley.

Cook faced 64 balls to score 46 runs before attempting a sweep shot off Raina and ended up giving a simple catch to the Indian captain. Cook added 52 runs with Joe Root in a bid to revive England innings.

Before this, England were 84 for the loss of two wickets at the end of 18 overs. Alastair Cook was batting on 42 and Joe Root was batting on 26. Both batsman steadied the ship for the hosts, after the early dismissal of Alex Hales and Moeen Ali.

Earlier, Cook and Hales got off to a good start against Bhuvneshwar Kumar and Yadav, before the latter induced a steep bouncer that Hales tried to slog only to be caught by Ajinkya Rahane.

India won the toss and elected to field first, having won the series after their resounding nine-wicket win in the previous ODI. Dhawal Kulkarni got to play just one game before being dropped in favour of Umesh Yadav, while Ben Stokes and James Tredwell came in to replace Gary Ballance and Harry Gurney. 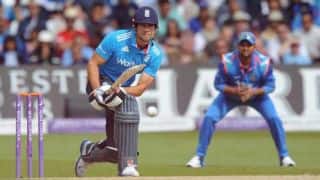