Alastair Cook missed out on his ton in the second Ashes Test at Lord's.

Australia  continue to dominate England in the second Ashes Test at Lord’s, London. At Tea, England are 285 for the loss of seven wickets, they are closer to avoiding the follow-on mark which is 81 runs away. Alastair Cook and Ben Stokes‘s stand had given England the platform and and just like Stokes, Cook too missed out of his 28th Test ton when he chopped one back onto his stumps for 96. Moeen Ali was positive and will hope to bat in the same vein after Tea as England will look to avoid the follow-on mark. He has Stuart Broad to accompany him. Live cricket updates: England vs Australia, 2nd Ashes 2015 Test, Day 3

Ben Stokes brought some sanity to the innings with a 145-run stand with skipper Cook. Stokes though missed out on his ton when he dragged one back onto his stumps for 87. Jos Buttler came in but did not last long and was out for a score of 13. He had survived a scare when Peter Nevill grassed a tough caught behind. Cook too got a life when Steven Smith dropped a tough change at backward square  when Cook was on 63. Runs though kept coming for the hosts as Australia started to feel a bit more desperate for wickets.

England then were in trouble when they were huffing and puffing at 30 for four at one stage late on Day Two. Mitchell Starc dismissed Adam Lyth in the first over, Gary Ballance survived as much possible but was cleaned up by Mitchell Johnson. Josh Hazlewood then got through Ian Bell and Johnson had the better of Joe Root to put England under severe pressure. Read: Australia end Day Two in command against England in 2nd Ashes Test at Lord’s

Earlier, Australia put up a mammoth score of 566 for eight declared. David Warner departed early for 38 but the 284-run stand between Chris Rogers (173) and Steven Smith (215) put Australia in the driver’s seat. Smith did not miss out on his maiden Test double and became the first player after Bill Brown to hit a double at Lord’s. Catch live cricket scores and updates of England vs Australia 2nd Ashes 2015 Test at Lord’s, Day 3 here

Earlier on Day One, Australia won the toss and elected to bat first. Australia made a couple of changes, bringing in Mitchell Marsh and Peter Nevill for Shane Watson and Brad Haddin. England went into the game unchanged from the previous Test. 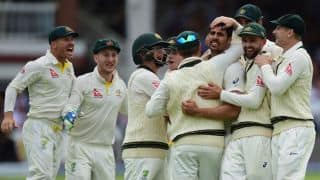