Disappointed England skipper Alastair Cook expressed his frustration after his team's fourth successive loss to India in the ODI series but felt that it was not because of lack of effort from his players. 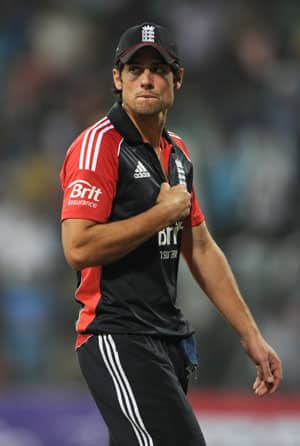 Disappointed England skipper Alastair Cook expressed his frustration after his team’s fourth successive loss to India in the ODI series but felt that it was not because of lack of effort from his players.

Cook said his players could not execute their plans and failed to convert their starts to big scores and it lead to their six-wicket defeat to India in the fourth ODI at the Wandheke stadium.

“It’s quite frustrating. We have not performed at the level we had done recently. We can’t fault training, effort or desire or commitment. We are performing anywhere near to what we can do,” said Cook after his side slumped to a six-wicket defeat at the Wankhede Stadium.

“We are definitely talking the right thing, but we need to execute it. We are scoring a lot of 30s and 40s but not getting big scores. It’s not easy to get that. Once you get set you need to score big because you can lose wickets in clusters.”

“We have talked about it. You can talk as much as you can but it’s up to the individuals to respond and deliver,” he said.

Asked why the team had rested their main spinner Graeme Swann, Cook said the aim was to give young leg-spinner Scott Borthwick a chance to play when the series was already lost.

“It’s not often in an international series that you get a chance to expose an youngster with no pressure. That’s the reason we exposed Borthwick. He bowled quite well though the figures don’t suggest so,” he said. (PTI)