England captain Alastair Cook, who took over the reins from Andrew Strauss before the India series, on Tuesday said that the added responsibility has brought the best out of him. 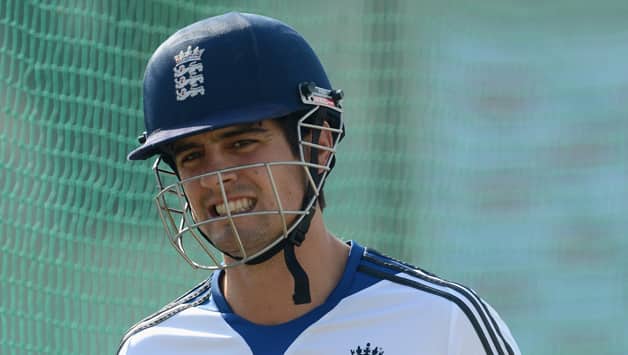 England captain Alastair Cook, who took over the reins from Andrew Strauss before the India series, on Tuesday said that the added responsibility has brought the best out of him.

“Maybe the added responsibility makes you more accountable to the side. That may have helped my batting…I really don’t know if it happened that way but it’s nice.

“As a captain you always want a good start with the bat… show that you can cope with the demands. That’s how it has happened but I can’t put a finger on how it happened,” Cook, who has hit two centuries in last two Tests, said while addressing the media on the eve of third game against India.

Stating that he was not someone who believed in the momentum, Cook said, “After the first game it (momentum) was with India but we managed to bounce back in Mumbai. So, not really (think that momentum helps).

“With the series at 1-1, and two more matches to go, it’s a good place to be as a player. You want to play in big games and that’s what we have over the next two weeks. That’s exciting.”

After their loss in Motera, England bounced back on turning wicket of Wankhede to thrash India by 10 wickets and level the series 1-1 and Cook feels that the victory had a positive impact on his team.

“It (the Mumbai win) certainly left us a little more confident and belief that what we are doing is fine. That doesn’t mean it is going to count for anything in this match.

“What we are doing on spinning tracks is right. But we need to improve on that, and we’ll need it. We are going to need some stand-up performances like we did in Mumbai if we are to have a chance,” insisted the skipper.

“It’s great that he is now back fully fit. He’s got a little more pace than the other guys. He’s bowled well in the sub-continent, especially in the One-dayers before.”

Speaking about the turning tracks, Cook said, “As I said in Mumbai it gave us a great chance of winning, because it was a result wicket. On the very flat ones, it’s very hard to get a result. Mumbai proved with a turning track that it gives both sides a chance to win.

“I’m not quite sure how this (Eden Gardens) wicket will play. It won’t have the bounce of Mumbai. As reports say it will turn from the third day, so both teams can bring spinners into the game.”

Meanwhile, Cook extended his support to Jonathan Trott, who is going through a lean patch with two ducks in two Tests.

“Trott averages (about) 50 in Test cricket. He scored over 700 runs this year alone. I have seen him practice really hard. You can’t always score runs though that’s what we’d like it to be. So you stay tough and the runs will come,” stressed Cook.