Alastair Cook intends to continue his Test career despite resigning as England captain after last year's 4-0 series loss in India.

Former England Test captain Alastair Cook is to miss Essex’s opening County Championship match of the season against Lancashire with a hip injury, the England and Wales Cricket Board (ECB) announced on Wednesday. Opening batsman Cook intends to continue his Test career despite resigning as England captain after last year’s 4-0 series loss in India. He had received clearance from the ECB to play in the First Division clash against Lancashire at Essex’s home ground in Chelmsford, east of London, starting on Friday. The match would have seen Cook and Lancashire paceman James Anderson, England’s leading Test run-scorer and wicket-taker respectively, in opposition. Alastair Cook: Will take a while to get used to not being England captain

But 32-year-old left-hander Cook will now have to wait until Essex’s match against Somerset at Taunton next week to make his debut for the season. His absence from the Lancashire fixture is understood to be a precaution against aggravating an injury which in itself is not thought to be serious at this stage.”Alastair Cook will miss Essex’s opening Championship fixture against Lancashire starting this Friday due to left hip soreness,” said an ECB statement.”Cook has been receiving treatment for the problem for several weeks. A scan this week has ruled out serious injury, but he will undertake an injection in the upcoming days to help settle his symptoms. Cook will continue his rehab with the Essex medical team.”

No longer involved in international ‘white-ball’ cricket, Cook is not expected to feature in June’s Champions Trophy 50-over tournament in England and Wales. A bid to ensure their players are as well prepared for the Champions Trophy as possible, means the ECB have not scheduled any early season home Tests this year. As a result, Test specialists such as Cook are not due to represent England again until the opening match of the South Africa series at Lord’s on July 6. That match is set to be Cook’s first Test since he announced his resignation from the captaincy in February.

Meanwhile, he is free to play both first-class and limited-overs cricket for Essex. 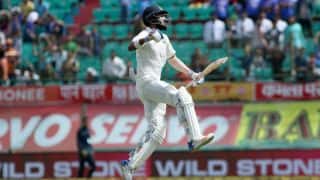