Alex Doolan boosted his chances of a Test debut in this month's Ashes series with a brilliant century for Tasmania in a Sheffield Shield match in Sydney on Saturday. 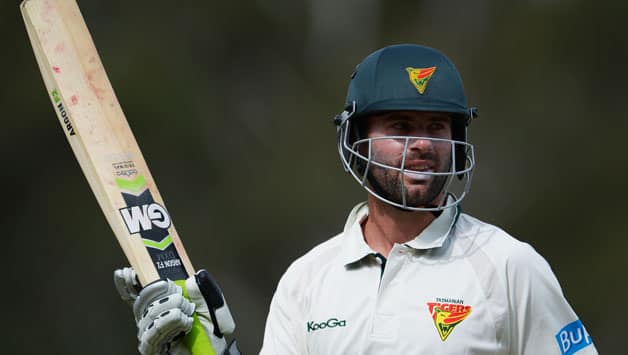 Alex Doolan boosted his chances of a Test debut in this month’s Ashes series with a brilliant century for Tasmania in a Sheffield Shield match in Sydney on Saturday.

Doolan scored 132 to help the defending Shield champions claim a thrilling two-wicket win over New South Wales on the final day of the four-day game.

Doolan, who emerged as a Test contender last summer, was a clear man-of-the-match after smashing 18 fours and a six and also top-scoring for his side in the first innings with a half-century.

It was ideal timing for the right-hander, who has another chance to impress next week for Australia A against England in Hobart ahead of the first Ashes Test in Brisbane on November 21.

Australia’s one day captain George Bailey is regarded as the leading contender for the vacant number six batting spot, but Test and NSW skipper Michael Clarke said Doolan had also pressed his claims for Test selection.

“He played very well, that was a fantastic innings no doubt about it and played a huge part in getting Tasmania home,” Clarke said.

“[Doolan] deserves a lot of credit, I thought he batted with great patience but played his natural game.

“If any selectors were watching that innings it’s got to help him that’s for sure.”

It was just the sixth First-Class century of Doolan’s 48-match career, and he credits fellow Tasmanian Ricky Ponting for helping him lift a gear last year.

“I think I came on in leaps and bounds last year thanks mainly to Ricky Ponting,” said Doolan, who turns 28 later this month.

“Under his tutelage I learnt more in 12 months than I had in the first five years of my career. I’ve got a lot to thank him for.”