Morgan was shocked to hear the news about Hales’ drug use and was livid with the batsman for going against the team’s "culture".

“Everybody in a senior players’ meeting agreed that the best decision was for Alex to be deselected,” Morgan was quoted as saying by BBC Sport on Thursday in Dublin ahead of England’s one-off ODI against Ireland.

“We believe it is the right call, made considering everyone in the squad.”

Morgan confirmed that pacer Jofra Archer will make his England debut on Friday along with Dawid Malan and wicketkeeper Ben Foakes.

Coming back to the Hales story. The batsman, 30, had taken time off from his county duties with Nottinghamshire for what his management said was due to “personal reasons”. However, on Friday, as England had to meet for a training camp, Hales’ management confirmed he was serving a 21-day suspension for an “on-field incident”. (ALSO READ: Alex Hales ‘devastated’ after being withdrawn due to drug ban from England’s World Cup plans)

Morgan was shocked to hear the news about Hales’ drug use and was livid with the batsman for going against the team’s “culture”, one that they had been working to adopt since the Hales and Ben Stokes altercation outside a Bristol nightclub in September 2017.

“We have worked extremely hard over the last 18 months to establish our culture and work towards values that everyone across all three formats could adhere to, respect and relate to,” said Morgan.

“We have been at that stage for six or seven months. They are in place. There has been a complete disregard for those values.

“There has been a complete breakdown in trust between Alex and the team. Everybody in the senior players’ meeting agreed that the best decision for the team and the culture moving forward was for Alex to be deselected.

“We don’t make that final call. I communicated this to Ashley Giles and the decision was made. It’s important now that Alex uses the support around him to try to turn things around.”

Morgan revealed that he had spoken to Hales after he was dropped, but his junior team-mate had declined to reveal to the skipper why he was missing Nottinghamshire games before news of the suspension emerged.

“Nobody knew,” said batsman Morgan. “When Alex was missing games for Notts I sent him a text to make sure he was alright.

“He said it was personal reasons and he needed time away from the game but didn’t indicate anything was awry. I trusted him. The news that has come out has potential to grow and creates a situation that we needed to address.” (ALSO READ: Eoin Morgan sends out urgent warning to England ahead of one-off ODI against Ireland)

The captain negated news of Hales will affect the team’s chances of winning the World Cup.

“One of the signs of a strong, player-led culture is that you can make a big decision close to a major tournament or something you have been looking forward to,” he said. 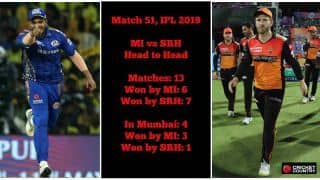 Today’s Best Pick 11 for Dream11, My Team11 and Dotball – Here are the best pick for Today’s match between MI and SRH at 8pm 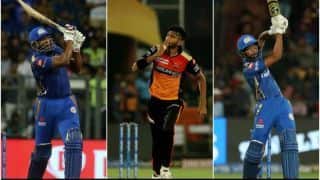