It was a must-win game for the team. And at the mid-innings break in their game against South Africa at the Shere Bangla in Mirpur, Bangladesh will need a batting performance reminiscent of the one showed against India in the first game of the World Cup to qualify for the quarter-finals. 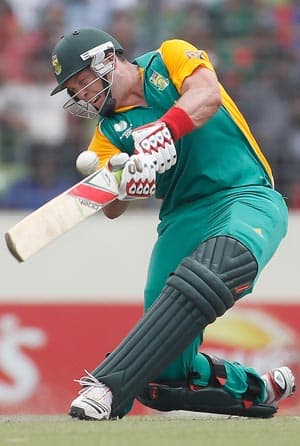 Jacques Kallis plays a shot during his knock of 69

It was a must-win game for the team. And at the mid-innings break in their game against South Africa at the Shere Bangla in Mirpur, Bangladesh will need a batting performance reminiscent of the one showed against India in the first game of the World Cup to qualify for the quarter-finals.

That the South African side have gone in with Lonwabo Tsotsobe and Wayne Parnell in place of Dale Steyn and Morne Morkel should make their task a tad easier, although 285 will be a tough ask.

South Africa, who have already got through to the next stage, would have liked to tick a few boxes. The form of their captain was probably one of them and one would have thought that this was a golden opportunity. Batting first after winning the toss, the side was off to a rapid start with 27 coming in the first three before the spinners pulled it back for the home team.

With Naeem Islam and Abdur Razzaq bowling in the first Powerplay, they conceded only ten in their four as South Africa pushed to 51 without loss in ten. Amla took on Naeem with a couple of boundaries to get the innings accelerated again, getting 32 off the bowling Powerplay.

At the other end, Smith seemed be overcoming his issues with the bat but at 45, he tried to charge at Mahmudullah and was stumped. Smith s problem was that his 45 had come from 68 balls and he had clearly not been able to get the runs as quickly as he would have liked.

Amla got to his 51 and looked as good as he has throughout the tournament. But much like what he has done in the World Cup, he failed to convert that into anything monumental. In fact, he inside edged one from Razzaq on 51 and South Africa looked like they were in a bit of a trouble at 107 for two on a pitch that seemed to be slowing and stopping while coming on to the bat.

JP Duminy, fresh from his match-winning innings of 99, joined Kallis and the aim of the exercise at this stage was to stall any chances of a collapse. To an extent, Duminy was successful in doing that, scoring 17 out of the 34-run stand that came in 45 balls.

It was not a spinner, but a pace bowler who had bowled only six overs thus far who sent back Duminy with a surprise bouncer. The ball should have been probably left alone but with the form under his belt, Duminy tried to hook it away and could only feather it to the wicket-keeper.

Again, what stood out in the innings was that the loss of the wicket did not bring about a flurry of them. It was probably due to their decision to play a batsman short Colin Ingram was dropped in favour of Imran Tahir which meant that each time the wicket fell, the side went into their shell.

Faf du Plessis added 82 for the fourth wicket with Jacques Kallis, who seemed to have gauged the pace of the track to perfection getting a 76-ball 69 in the process. It had a six and five boundaries but as expected, there were many singles and twos in his knock.

Du Plessis also got to his half century but despite South Africa scoring 51 in the ten overs between 30 and 40, the final push came only towards the end of the innings with 16, 11 and 15 in three of the Batting Powerplay overs.

Robin Peterson provided the final push with a nine-ball 22 and South Africa had ended with 92 off the last ten overs.