Ian Bell's half-century and an inspired bowling performance helped England trump South Africa in their fourth One-Day International at Lord's by six wickets and take a 2-1 lead in their five-match series on Sunday. 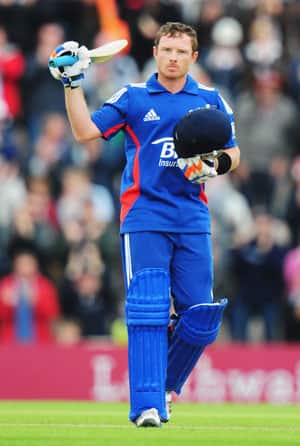 Ian Bell scored a fluent 88 off 137 balls, studded with eight boundaries and a six Getty Images

Ian Bell‘s half-century and an inspired bowling performance helped England trump South Africa in their fourth One-Day International at Lord’s by six wickets and take a 2-1 lead in their five-match series on Sunday.

Bell added 104 runs for the second wicket with Jonathan Trott to lead England s recovery after they lost Alastair Cook early on.

Cook fell to South African pacer Dale Steyn, who trapped him in front of the wickets for two off six balls.

Trott missed out on a half-century when he was dismissed by Dean Elgar for 48, which came off 77 balls and four boundaries.

Morgan remained unbeaten on 36 with five hits to the fence, while Kieswetter scored a quick 21 off 12 balls with three boundaries and a six.

Earlier in the first innings, James Tredwell atoned for dropping two catches with three wickets as England restricted South Africa to 220 for eight.

The off-spinner took three for 35, all stumped by wicket-keeper Craig Kieswetter — in eight overs.

Tredwell had kept his place after figures of two for 49 during England’s four-wicket win across London at The Oval on Friday which levelled the five-match series at 1-1.

The Kent bowler only got his chance when England rested number one spinner Graeme Swann for the rest of this series because of a longstanding elbow injury.