An excellent all-round display from Brad Hodge did for a woeful Rajasthan Royals, whose season came to a disappointing end with a crushing eight-wicket defeat to Kochi Tuskers Kerala. 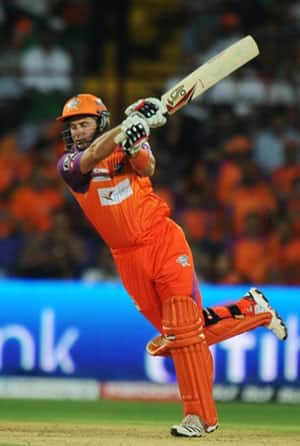 An excellent all-round display from Brad Hodge did for a woeful Rajasthan Royals, whose season came to a disappointing end with a crushing eight-wicket defeat to Kochi Tuskers Kerala. That margin of victory gives Kochi Tuskers Kerala a sliver of hope for the remainder of the competition, and they had Hodge to owe for such a polished performance. Given a whole four overs to bowl, Hodge spun out four wickets and then hurried the victory with a brisk 33 off 18 balls. By getting home in 7.2 overs, KTK recorded the fourth biggest Twenty20 win ever and second highest in the IPL.

Having removed RR s openers off successive deliveries Faiz Fazal rapped on the pads and Rahul Dravid sucked into edging a good away swinger KTK found further success in the sixth over. Ajinkya Rahane, shuffling across his stumps to try and work Sreesanth away, was hit plumb in front.

Shane Watson opened his shoulders to strike the debutant spinner Padmanabhan Prasanth for two sixes over midwicket to raise the team fifty, and hammered a full toss over long-on to make it 18 off the eight over. But that was as good as it got for Watson, as Prasanth Parameswaran nailed a full delivery that crashed into leg stump.

At 64 for four, RR needed to consolidate. Their run rate was just over seven, so a few quiet overs could be played out. Instead Pinal Shah tried to be the hero only to miscue an attempted big hit off Brad Hodge s fourth ball to long-on (69 for five). Hodge did the trick for KTK, bowling Jacob Oram for 0 with one that skidded on and brushed Oram s pads and then adding Shane Warne who went for an expansive slog and dragged the ball back onto his stumps.

Hodge was also involved in the run-out of Ankeet Chavan, before he got Ashok Menaria (31) to slog to the deep. Sreesanth allowed just a single run in his final over, and the final wicket came when Nayan Doshi miscued Parameswaran to midwicket. RR just managed to avoid their lowest total of the season – 81, against Kolkata Knight Riders.

McCullum made short work of the chase, slamming four sixes in his first 11 deliveries. Three of them came in the second over, bowled by Oram, each hit back over the bowler s head with disdain. So massive was the over for KTK that Mahela Jayawardene s dismissal off the third ball was forgotten. After two overs, KTK were 38 for one.

Looking for another six, McCullum fell to Nayan Doshi s first ball but Hodge walked out and collected 14 off the over with a three superb shots down the ground. Parthiv Patel opened his account with an uppercut six, but the shots to cherish were consecutive back-foot drives off Oram which threaded the gap at cover. Hodge was a man in a hurry, collecting fives fours and two sixes in his innings. It was one of the most one-sided victories this season.

Man of the Match: Brad Hodge

Despite a poor IPL4, captain Sangakkara is upbeat about Deccan Chargers' future