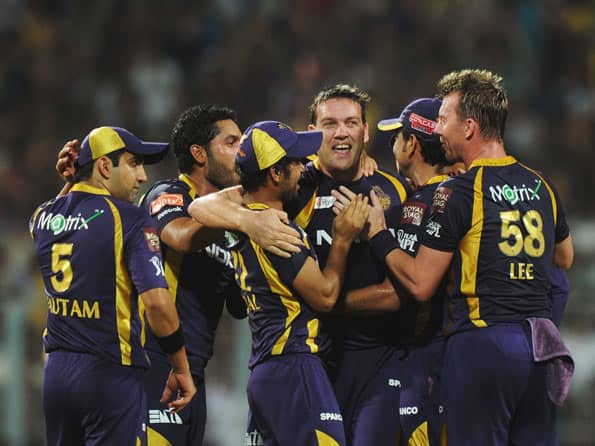 Gambhir bulldozed the Bangalore bowling with his blazing 51-ball knock as Kolkata posted an imposing 190 for four, their highest total of the season, and then restricted Bangalore to 143 for six.

Apart from Gambhir, Brendon McCullum (43 off 37) and Jacques Kallis (41 off 27) contributed in their huge score.

Gambhir played some breath-taking shots in his innings, which was studded with five huge sixes and nine fours.

Bangalore wilted under pressure of big chase and lost three top-order batsman inside six overs. They just played a catch job from there on with Chris Gayle holding one end.

Gayle was top scorer for Bangalore with his 86 off 58 balls but his fiery knock came too late. His knock was adorned with six sixes and seven fours.

Had fellow West Indian Sunil Narine not dropped Gayle in the third over, the visitors could have suffered worse defeat.

With this win Kolkata stay on second position in the points table behind Delhi Daredevils but now have 11 points, two better than Chennai Super Kings and RCB.

Bangalore needed a good start by they lost Tillakaratane Dilshan (1), Virat Kohli (18) and AB de villiers (0) in a hurry and were ousted from the game.

Earlier, everything went right for Kolkata, from winning the toss to a good start and then a good finish.

Gambhir and Brendon McCullum put on 95 runs for the opening wicket, their highest first-wicket stand of the season, to lay foundation of a big score. Gambhir also added 80 with Kallis for the second wicket.

McCullum supported Gambhir well with his 37-ball 43, which had eight fours and after the fall of the Kiwi, Kallis proved to be an able ally for his skippper.

However, Gambhir was not lucky enough to complete his first IPL century as he fell short by seven runs when he was dismissed by Zaheer. He was caught by K P Apanna at the long-off boundary while going for a big shot.

Gambhir survived two catches at the start as Harshal Patel dropped him at the third-man boundary though it was a stunning effort. One ball later Gambhir got a second life on 13 when Gayle missed an easy catch at the gully.

McCullum struggled to score quickly but with Gambhir in full flow the duo raced to 46 for no loss in six overs.

McCullum was tentative to start with facing 20 deliveries for his 11 but he soon started get going giving Gambhir a fine support as the duo raced to 95, their highest stand this season.

Vettori gave his side the breakthrough when he castled McCullum but the Knight Riders were by then were on course of a big total.

Sloppy fielding added to the Bangalore’s woes as Gambhir made the most of it notching his 13th IPL half-century in 28 balls.

On 59, Gambhir got another life, though another difficult chance when Vinay Kumar could not get hold of one at the long-on boundary.(PTI)