This commanding victory will give this Pakistan side a huge boost in confidence in the coming games of the series.

An all-round show by Pakistan in the third One-Day International (ODI) at Colombo has left Sri Lanka clueless as the visitors thrashed them by a huge margin of 135 runs and took a 2-1 lead in the five match series. This win also kept the hopes of qualifying for ICC Champion Trophy 2017 alive for Pakistan. It was almost a perfect day in the office for Azhar Ali’s boys, apart from the brief period during the second half of the game when it was reported that a Pakistani player was hit by a stone near the rope. The situation, however, was not as bad as it looked and the local authorities managed it very efficiently. Scorecard: Sri Lanka vs Pakistan 2015, 3rd ODI at Colombo

Apart from this unfortunate incident, on-field it was a thoroughly professional performance for Pakistan. First they won the toss and put up a huge score on board, thanks to significant contributions from all of their top batsmen. Later their bowlers backed it up with a disciplined bowling performance. In this game Pakistan out-fielded Sri Lanka as well. This commanding victory will give this Pakistan side a huge boost in confidence in the coming games of the series. READ: Stone pelting on Pakistan fielders halts play at Colombo; ground being evacuated

Sri Lanka were never in the game during their chase of 317. Their openers failed to give a start like they did in the last match. They lost four top order batsmen before reaching the 100-run mark. Tillakaratne Dilshan was the first man to get out, when he tried to hit Anwar Ali over mid-off but failed to do so. Azhar Ali took a good catch. Last game’s hero Kusal Perera failed to take off in this game as he became the second victim of Anwar for just 20. Later Yasir Shah struck twice and got rid of Upul Tharanga and Angelo Mathews in quick succession. Soon Sri Lanka were left tottering 142 for seven in the 31st over. Scorecard: Sri Lanka vs Pakistan 2015, 3rd ODI at Colombo

In the 34th over of the Sri Lankan innings, the rioting crowds forced cricketers to retreat to their dressing rooms as projectiles reached the outer field of the Premadasa Stadium. Police deployed anti-riot squads to clear two blocks of stands near the scoreboard as rival groups of spectators clashed, pelting stones into the grounds from outside the stadium after they were forced out. The hosts were struggling at 158 for seven at that time when the disturbances at the grounds in the Sri Lanka capital forced the umpires to order the players to their dressing rooms until the situation was brought under control. VIDEO: Stone pelting at the Premadasa Stadium

Soon the game resumed and within the next seven overs Pakistan completed the formalities. Shah shined once again for the visitors as he finished with figures of four for 29 in his 10 overs. Apart from him, debutant Imad Wasim took two for 28 and pacer Anwar Ali took two for 24. For Sri Lanka, only Lahiru Thirimanne showed some resistance with a well-played 56.

Earlier, Pakistan had an excellent batting half of the game after winning the toss. The top six batsmen in the batting line up were all among runs, with Sarfraz Ahmed top scoring with a 74-ball 77. Apart from Sarfraz, Mohammad Hafeez also scored 54. Skipper Azar, who reached 1,000 ODI runs during the course of this innings, narrowly missed out on his fifty, after being unfortunately run out for 49. Pakistan finished with a challenging total of 316 for four in their allotted 50 overs.

Pakistan openers Ahmed Shehzad and Azhar put on 93 runs for the first wicket. But after that, both of them got out before their half-centuries. At 124 for two, Sri Lankan bowlers were trying to put on the pressure on the two new Pakistani batters, Hafeez and Sarfraz. But they were equal to the task and showed great fighting spirits. The pair steadied the ship with a 72-run partnership.

Rain halted play for a brief period of time, but thankfully no overs were lost. But the rain break didn’t help the momentum of the Pakistan innings, as straight after the break, Hafeez got out to left-arm spinner Sachith Pathirana, trying to play an expensive shot. Later in the innings, Sarfraz, who looked well-set for a ton, also lost his wicket due to another unfortunate run out. Pakistan got the finishing touches from the experienced Shoaib Malik and Mohammad Rizwan. The 34-ball 59 runs by this pair took Pakistan’s score past 300-run mark. No other Sri Lankan bowler, apart from Pathirana looked threatening on this flat wicket. Lasith Malinga gave away 80 in his 10 overs.

Pakistan retained all-rounder Hafeez in the playing eleven even though he is banned from bowling for a year due to an illegal bowling action. Hafeez scored a century in the first game and now again shined with bat in this game. The tourists replaced batsman Babar Azam with debutant left-arm spinner Wasim to bolster the bowling. Sri Lanka, on the other hand picked an unchanged side. The hosts drew level in the five-match series in Pallekele on Wednesday after Pakistan won the opening match at Dambulla last Saturday.

Ninth-ranked Pakistan need a series win to remain in contention for a place in the eight-nation Champions Trophy in England in 2017. Sri Lanka, currently ranked fifth, are assured of taking part in the tournament. Bangladesh, after their recent dream run at home, have also secured a place in the tournament. The fight for the eighth place is between Pakistan and West Indies and with this victory, Pakistan now have the advantage. The next game of the series will be played on July 22 at the same venue.

Man of the match: Sarfraz Ahmed 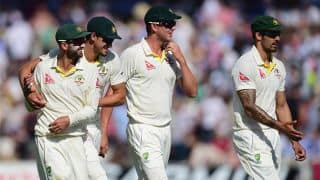