Coming into this match there had been some concern over Tillakaratne Dilshan throwing away his wicket after getting starts. He answered that emphatically with 144 from 131 balls, a match-winning innings littered with hostility and bold strokeplay. 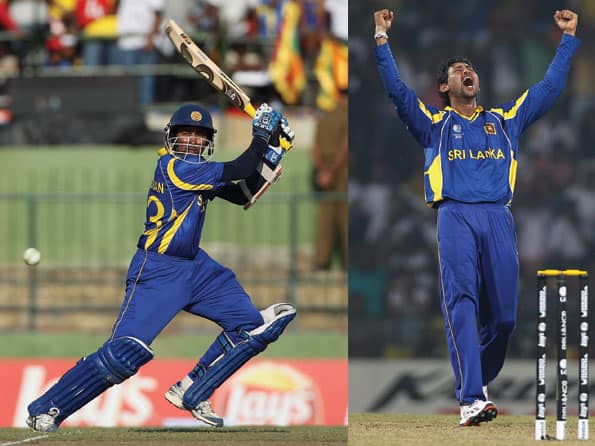 Coming into this match there had been some concern over Tillakaratne Dilshan throwing away his wicket after getting starts. He answered that emphatically with 144 from 131 balls, a match-winning innings littered with hostility and bold strokeplay. Allied with his brilliant fielding and four wickets from handy off-spin, Dilshan s class shone through, at a useful time too.

If Dilshan s century was fashioned with shots of fury, Upul Tharanga s silken 133 formed the more temperate half of a partnership of 282 a World Cup record and four runs shy of the best opening stand in ODI history. It was the first instance of two openers scoring centuries in the same World Cup match, and set up Sri Lanka for a place in the quarter-finals.

Having opted to bat, Zimbabwe didn t pick up a wicket until the 45th over. Sri Lanka collapsed thereafter, losing six wickets for 26 runs, but eventually reached 327, the second highest total ever conceded by Zimbabwe in a World Cup. Zimbabwe began strongly only to fall away – Dilshan the spinner then took over and ended with Murali-like figures of four for four – and finished with a total 94 shy of what the Sri Lankan openers managed.

For the first time this tournament Zimbabwe opened with pace from both ends, and the gentle medium stuff on offer suited Dilshan wonderfully. A lovely drive for four got Sri Lanka going, but it was Chris Mpofu s opening partner, Tinashe Panyangara, who wound up Dilshan. Nineteen came off his first over and after five overs Sri Lanka were 41 for 0.

While Dilshan was crashing leather, Tharanga who came into this match averaging 45.77 against Zimbabwe was no less purposeful, if lacking the ferocity of his opening partner. He swung off the pads effortlessly, pulled sweetly, and his punchy drives on the up past cover were a treat.

The combination of Tharanga’s front-foot driving and Dilshan s back-foot play was so dominant that no bowler was spared during the Powerplay. Ray Price, introduced into the fifth over, wasn t allowed to settle by Dilshan while Tharanga carted three fours off Mpofu s third over, leaving him with figures of 0 for 28.

Tharanga knows a thing or two about batting big. He features in the ODI record opening stand (286) and before today had also contributed to stands of 215, 202, 201, and 188 during his career. Today his appetite for runs was on ample view, and yet again his application was laudable. There was no rush and no rash shots. Run by run, he ground Zimbabwe down and when the loose balls came, Tharanga was quick to pounce.

Dilshan s century came up in the 31st over but he only managed 24 runs in the ten overs, with Price and Prosper Utseya bowling tidily. Tharanga celebrated reaching his century by hitting three boundaries and was soon past his partner of an edged four off the wayward Mpofu.

Tharanga s first rude shot, a big hit over extra cover, was picked in the deep and Zimbabwe had their first breakthrough. As so happens when one half of a dominant partnership is dismissed, Dilshan followed Tharanga back after pulling to deep midwicket. After such an opening act, Sri Lanka should have reached 350 but yet again a lack of firepower in the middle-order was brought to the fore.

Zimbabwe refused to be ignored and a century opening stand sunk Sri Lankan shoulders, momentarily at least. Brendan Taylor was the dominant partner in a 116-run alliance Zimbabwe s previous best in the tournament was 22 – with Regis Chakabva, but once he departed the chase fell away.

Where their openers had been exemplary, Sri Lanka s new-ball pair were sloppy; Lasith Malinga had a particularly bad evening, fielding like a schoolboy and leaking runs. By the time Chakabva collected his first boundary, with plenty of help from a sloppy Malinga at third man, Taylor had laced three and Zimbabwe had 44 on the board. Two more sped off Taylor s bat in Nuwan Kulasekara s next over.

Taylor appeared aware of where he could score runs, and relied on errors in lengths from the bowlers. When Malinga dropped short, Taylor uppercut four; when Thisara Perera did so, he pulled six. Perera created an opportunity, except Malinga failed to judge the catch at third man.

At 111 for 0 after 19 overs, Zimbabwe were exactly where Sri Lanka had been. However, under pressure, they chose to fall apart. Chakabva was bowled by Muttiah Muralitharan playing down the wrong line, while Angelo Mathews came on and shifted Tatenda Taibu and Taylor one nicking, one pulling in consecutive overs (132 for three).

From here it all spiralled downhill for Zimbabwe. Called on to bowl some offspin, Dilshan had Utseya stumped off his third ball, and in his second over dismissed Craig Ervine and Greg Lamb with successive deliveries.

The hat-trick ball drew an outer edge, but having taken a ripper the delivery before, Mahela Jayawardene grassed a low catch. It didn t matter too much to Dilshan, who plucked off his fourth wicket before Murali administered the final rites.

Sri Lanka rustle up 327 against Zimbabwe