Border has also backed Tim Paine ahead of the Pakistan tour.

Few have a better idea than Allan Border when it comes to handling Pakistan at their den. The legend had scored 1,666 against Pakistan at 59.50, but more importantly, his 743 runs on Pakistan soil came at 61.91 (the second-highest for any touring cricketer with a 700-run cut-off). This includes the Lahore Test of 1979-80, when Border became the first cricketer (he remains the only one) to score two 150s in the same Test.

Ahead of Australia‘s tour of UAE to play Pakistan, Border has advised Tim Paine and his men to on how to go about it. In an interview with Fox Sports, Border said: The first thing I d be addressing is that we play the Australian way and get back on track there. Yes, we want to get back to playing tough, uncompromising cricket but there s a spirit of play in the game. Australian teams have always done that really well. Tough cricket but fair. Maybe we ve got a little bit away from that in the past.

What about Paine the captain? He s in charge now so he s got to put his own style of captaincy there. He can t be scared to back his own judgment. Even though he s basically a rookie Test cricketer, he s been around cricket for long enough to give it a gut feel. He will know what should and shouldn t be happening, so he should back his gut instinct. If you get that dressing room sorted out so it s a happy place for players to be it s a good solid start. 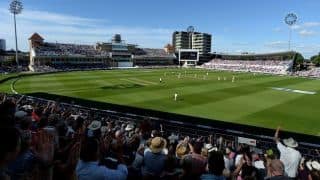