Donald said that they have got to stay patient with this partnership.

South Africa bowling coach Allan Donald is confident that his charges can rip through West Indies‘ batting order, despite the tourists being just two wickets down for 147 at stumps on day three of the second Test in Port Elizabeth on Sunday.

Kraigg Brathwaite remained unbeaten on 65 together with Marlon Samuels on 60 as the pair shared an unbroken 92 run stand for the third wicket on a day when the West Indies recorded their best day’s work of the series to date after losing the first Test comprehensively.

Donald said that they have got to stay patient with this partnership, adding that they haven’t disrespected this West Indies team in the past, Sport24 reported.

But, he claimed that once his side gets Shivnarine Chanderpaul out they know they can respectfully race through the West Indies batting line up.

After losing the first Test of the three-match series by an innings and 220 runs, Donald was not surprised by the response from the Caribbean outfit. He said that they knew the West Indians would come here and front up, and added that this pitch is probably tailor-made for a guy like Chanderpaul where he would just grind away.

After the West Indies had lost two quick wickets before the tea break in reply to South Africa’s 418 for eight declared, Brathwaite knuckled down to bring up his fifty off 74 balls.

It was also his fifth half-century in 2014, the most by a West Indian opener in the last five calendar years, the report added. 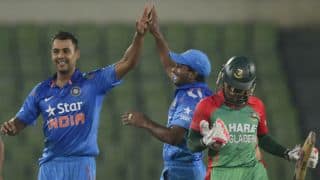