Jasprit Bumrah's selection in the Indian side for the first Test against South Africa at Cape Town raised many eyebrows.

Jasprit Bumrah’s selection in the Indian side for the first Test against South Africa at Cape Town raised many eyebrows. He was handed his Test cap and chosen ahead of Umesh Yadav and Ishant Sharma. Bumrah took 4 wickets in the match which included AB de Villiers’ scalp twice. Bumrah is considered to be one of the finest limited-overs bowlers in the world, but Donald believes he is ready for Tests. While there are calls for dropping Bumrah for the second Test at Centurion, South African pace legend Allan Donald hailed Bumrah and stated he “belongs to” Test cricket.

“I can see why he was selected. He s very reliable, he s very skillful, he s got pace. I thought he had a tremendous first Test. It looks like he belongs in that environment and not just being labelled in T20. I think it s good to see him in the Test arena. I think he s there to stay for a long time,” Donald told Hindustan Times.

Donald praised the Indian bowling line-up and states if the wickets remain like the one at Newlands, the two sides with their respective strong bowling attacks will keep fighting close contests.

“I think it s (India has) an amazing bowling line-up. They have passion, control, they are very aggressive and that was a spirited bowling performance. That positivity can be taken to the next Test match. Yes, they are different in pace but they have a lot of skill. South Africa s bowling attack is based on pace with the exception of Philander while the Indian bowling attack has got incredible variety. If South Africa keep preparing wickets like this, it will bring the two teams closer.

“India came out with an amazing performance. I think they will take a lot of that moving into Pretoria and Johannesburg where the wickets will definitely be faster, bouncier and it will definitely go a little sideways as well,” Donald further stated.

The second Test at Centurion begins on Saturday. 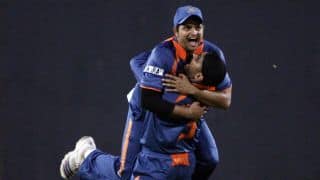