One of West Indies' umpiring greats, Sang Hue passed away aged 82 in Jamaica.

Sang-Hue was one of cricket’s rare representatives of Chinese ancestry was involved in one of the controversial run-outs in the history of the game, which Kallicharan was involved too. In the first Test between West Indies and England in 1974, Kallicharan prodded the ball to Tony Greig at silly point and walked off as it was the last bowled being bowled in the day, said a Bipin Dani Observer report.

Much to everyone’s surprise, Grieg hit the stumps at the non-strikers end and was initially signalled out. The decision sparked off angry protests and rioting in the stands amongst the capacity crowd in Port-of-Spain and a two hour long discussion ensued between the umpires and both teams. It was umpire Sang Hue who made the final call to overturn the decision and in the best interests of the game and let Kallicharan continue batting when play resumed the next day.

Kallicharan, however, has refused to recall the incident. “It is not the right time to discuss on this issue. I had absolutely no ill-feelings towards him and will try to send a condolence message to his family. I have full sympathy for the family”, he said.

“It was nice on the part of the Jamaica Cricket Association (JCA) who have named umpires’ room after his name. They set the best example”, Kallicharan added. 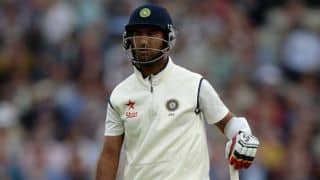 Cheteshwar Pujara to play for Derbyshire