Nobody in history has been dismissed in this fashion.

An amateur cricketer from England is believed to be the first batsman to have been given out for handling a no-ball, British newspaper The Times reported on Wednesday. Bryn Darbyshire, 35, was batting for Lymington in Hampshire, southern England when the bowler overstepped the crease and the umpire declared a no-ball. Jason Gillespie wants England to persuade him to leave Yorkshire coaching job

In attempting a shot, Darbyshire only clipped the ball, but when he then picked it up and threw it to a fielder, the fielding team appealed and he was given out. According to Law 33 of rule-making body the Marylebone Cricket Club‘s (MCC) Laws of Cricket, Darbyshire should have asked a fielder for permission to handle the ball.

While a batsman cannot be bowled, caught or given leg before wicket on a no-ball, he can be dismissed for handling the ball, hitting the ball twice, obstructing the field or being run out. Mark Williams, the MCC’s laws of cricket adviser, told The Times that it was possibly the first time that a player had fallen victim to clause 16 of Law 24 (No-ball). Stuart Broad: No issues sharing dressing room with Kevin Pietersen

“The law is there so that a batsman can’t touch the ball deliberately while the fielding team is trying to run him out,” Williams said. “The fielding team were perfectly justified in appealing.”

Darbyshire complained: “I don’t think the umpire did anything wrong, but I think it was bad sportsmanship on the part of our opponents. I had hit the same bowler for six off my second ball and was taking him apart. They probably wanted to see the back of me.” Andrew Strauss urges England to learn from All Blacks

Darbyshire’s side went on to lose the match by 58 runs. 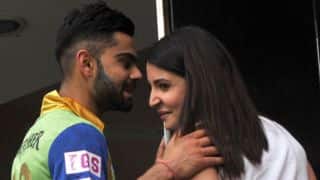