The 33-year-old batsman, who was part of Hyderabad's Ranji Trophy squad, in a communication with the HCA, informed them that he aims to focus more on ODIs and T20s.

In a development that is sure to catch everyone by surprise, India batsman Ambati Rayudu has announced retirement from the longer format of the game, including the Ranji Trophy. The 33-year-old batsman, who was part of Hyderabad’s Ranji Trophy squad, in a communication with the Hyderabad Cricket Association, informed them that he aims to focus more on ODIs and T20s.

“It has always been an honour to play for Hyderabad and I can never forget the kind of support I got from all those here, including my fellow players, coaches and the officials. And especially, the way I was welcomed back into the BCCI fold after the stint in the rebel ICL.”

Rayudu never broke into the Indian Test team but possessed a strong First-Class record for Hyderabad, Andhra, Baroda and Vidarbha. In 97 matches, Rayudu has scored 6151 runs at an average of 45.56 with 16 centuries and 34 half-centuries including a career-best of 210 against Andhra.

Rayudu made his first-class debut for Hyderabad in January 2002, at the age of 16, during the 2001 02 Ranji Trophy. Rayudu appeared in all matches for Hyderabad in the 2002 03 Ranji Trophy and amassed a total of 698 runs at an average of 69.80 to finish third on the leading run-scorers list. During the tournament, playing only his third Ranji game, Rayudu scored 210 and 159 not out against Andhra in the same match. He became the youngest player in the history of Ranji Trophy to score a double century and a century in the same match.

Rayudu was with Hyderabad the first five seasons for his domestic career before switching to Andhra during the 2005-06 season. Having spent just one season there, the batsman returned to Hyderabad and played for them until 2010. The next six years, Rayudu played for Baroda and moved to Vidarbha for the 2016-17 season before again returning to Hyderabad last year. Having missed the first match of the ongoing season due to national duty, Rayudu was scheduled to join the team for Hyderabad s next match against Tamil Nadu starting November 12. 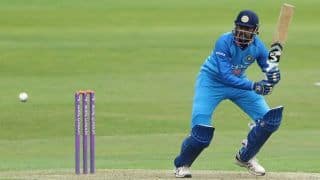