Ambati Rayudu's fine knock of 105 resurrected India A's floundering innings as the team posted a challenging 339 in their first innings on the second day of the first unofficial cricket Test against New Zealand A on Thursday. 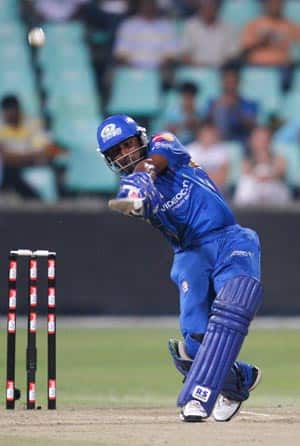 Ambati Rayudu’s fine knock of 105 resurrected India A‘s floundering innings as the team posted a challenging 339 in their first innings on the second day of the first unofficial cricket Test against New Zealand A on Thursday.

In reply, the Kiwis were four down for 105 in 31.4 overs when bad light forced an early end to the proceedings at the Bert Sutcliffe Oval here.

Struggling at 136 for four overnight, Rayudu single-handedly lifted the team out of the precarious situation. After some decent contributions from the lower-order batsmen, the Indians seem to be in a position of strength now.

The rebuilding job started with Rayudu sharing a 59-run fifth-wicket stand with Ashok Menaria, who made a 47-ball 30, including four boundaries, to stabilise the innings after a mini-collapse on day one.

After Menaria was dismissed by an economical Neil Wagner, Rayudu found another able partner in wicketkeeper Naman Ojha (41). The duo shared the most important partnership of the innings that contributed 105 runs to the Indian total.

Ojha struck three fours and a couple of sixes during his 59-ball stay in the middle which ended when he was caught by all-rounder Luke Woodcock off the bowler’s own bowling.

Rayudu’s resillient knock, during which he smashed 15 fours and a six, also came to an end soon after when he edged an Andy McKay delivery to wicketkeeper Reece Young.

The rest of the lower order could not hold fort for too long and the innings eventually folded after 86 overs.

The host team’s reply was off to a disastrous start as they lost a wicket off the very first ball when opener George Worker (0) was trapped LBW by R Vinay Kumar.

The other opener, Tom Latham was unbeaten at 54, which included five fours, but was let down by the middle order which failed to make any worthwhile contribution.

The medium-pace duo of Vinay and Shami Ahmed combined to pick up two wickets apiece to put the host side in a spot of bother.

For New Zealand, Reece Young (28) was giving Latham company when stumps were drawn for the day, leaving the match evenly poised.