Ambati Rayudu scored 217 runs at a strike-rate of 101.4 while averaging 72.33 during the five-match series against West Indies.

Batting legend VVS Laxman reckons Ambati Rayudu‘s consistency since his return and him subsequently ending the search for a dependable batsman at No. 4 spot has been a massive positive for India.

Since his return to ODI squad at the Asia Cup 2018, Rayudu has struck a century and three fifties across 10 innings. His reliability and ability to switch gears when needed has earned him the backing of his captain Virat Kohli during the recent ODI series against West Indies at home.

Rayudu scored 217 runs at a strike-rate of 101.4 while averaging 72.33 during the five-match series which India won 3-1. “One of the biggest gains has been the consistency at No. 4 of Ambati Rayudu since his return at the Asia Cup in September,” Laxman wrote in his column for The Times of India on Saturday. “The No. 4 position is a pivotal one because more often than not, he will be walking out to join a set batsman. It becomes important to rotate strike from the off so that neither you nor your partner feels the pinch. Rayudu is adept at doing that against the spinners, and at using his feet as well as the depth of the crease to the faster bowlers.”

Injuries have been the biggest reasons for Rayudu missing out on international matches. Since his ODI debut in June 2013, the 33-year-old has managed to play 45 ODIs for India. “His [Rayudu’s] emergence as a dependable, reliable and explosive No. 4 is a massive positive. Even though he hasn t played a lot of international cricket, he is a very experienced batsman and a huge asset to the side,” Laxman added.

While India have managed to find solutions to a couple of issues for now, but the fragility of their middle-order which hasn’t been tested thoroughly due to the terrific form of their top-three batsmen. Rarely it has been put to test.

“The [Indian] think-tank will be mindful that, when the top three haven t delivered, the middle-order hasn t yet been able to win a game from a pressure situation all on its own. But it will also be delighted that a fair few questions that lingered before the the series have been answered,” he observed.

With the left-arm seam of youn Khaleel Ahmed, India have added another dimension to their pace-attack. He has the ability to move the ball both ways. With seven wickets in four matches, he finished as the series’ joint-second highest wicket-taker.

Laxman wants India to persist with the 20-year-old. “The other positive was the encouraging progress of Khaleel Ahmed. He brings a new dimension with his left-arm fast option, and has shown that he can get the ball to go both ways. He must get a long run leading in to the World Cup so that he is both confident and ready by the time the big stage beckons.”

In their final leg of the India tour, West Indies will face India in a three-match T20I series starting Sunday. Laxman feels that in the absence of Kohli and MS Dhoni, the hosts can expect a tough contest. “The Windies didn t cash in on the momentum from Pune, but I expect them to come out all guns blazing in the T20s. They will be fortified by the arrival of Carlos Brathwaite, Kieron Pollard and Andre Russell. A young Indian side, without Virat and MS, will have their work cut out. There will, I can guarantee, be no shortage of fireworks,” he wrote. 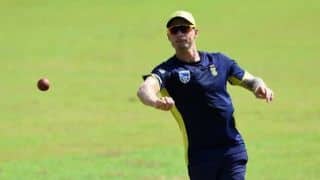