MS Dhoni finished with a 40-ball 68 in his final innings as captain of an Indian team.

Ambati Rayudu s excellent hundred guided India A to 300 for 4 against England in the first warm-up one-day match at Brabourne Stadium, Mumbai. Rayudu brought up his ton off 97 deliveries but retired not out after that, which brought the man of the moment MS Dhoni to the crease on his last game as captain of an Indian side, much to the delight of the fans in the stadium. There were some useful contributions too. Shikhar Dhawan, who opened the innings with Mandeep Singh, scored a patient 84-ball 63 and Yuvraj Singh, who was named in the Indian One-Day International (ODI) team after a gap of over three years finished with 56 in quick time. But Dhoni did what he does best finished off the innings with a flurry of boundaries. The last over from Chris Woakes went 6, 4, 4, 2, 6 and 1.

India A had good partnerships throughout their innings, barring the opening stand. Mandeep was bowled by David Willey early on for 8. Dhawan and Rayudu joined hands then. They started off slowly. They brought up their 50-run stand off 75 balls, but their next 50 runs came off just 39 deliveries. India A were playing spin quite well. They took special liking to Liam Dawson, who conceded 24 from his first two overs. He did not get to bowl after that. However, Jake Ball was introduced into the attack and almost immediately, found Dhawan s outside edge to the wicketkeeper.

Yuvraj walked in at No. 4, amidst the Dhoni chants. He took his time initially, but then started going after the bowling, especially the spinners. He picked Adil Rashid s wrong ones with ease and in fact dispatched him over the fence twice in the 34th over. However, he and Rayudu scored at a brisk pace and took India s run-rate over 5. They added 91 for the third wicket, before Rayudu brought up his fourth List A ton and retired not out to pave way for Dhoni. Yuvraj too had reached his fifty better than run-a-ball by then.

Yuvraj continued getting a few crucial boundaries, but holed out at fine leg for 46-ball 58 after the England bowlers kept peppering him with short deliveries. Ball was rewarded with his second wicket. Dhoni too joined in with back-to-back boundaries of Willey.

Sanju Samson was dismissed off the very first delivery, which brought Hardik Pandya to the crease with little over 4 overs to go and the score at 257 for 4. Dhoni was going to be crucial, if India A were to reach somewhere close to 300. Pandya was happy to give as much strike as possible to Dhoni and the captain obliged with a few boundaries and some quick ones and twos. Dhoni reached his fifty off 35 deliveries and has given India A a good chance of defending this total. Dhoni scored 23 runs off the final over from Chris Woakes to take India past 300.

Earlier, England XI won the toss and elected to field first. Eoin Morgan had decided to leave Ben Stokes, Liam Plunkett and Jonny Bairstow on the bench for this match. They might feature in the second warm-up game, which is scheduled to be played on Thursday. India named Siddharth Kaul as their 12th man, giving a chance to some youngsters like Yuzvendra Chahal, Samson and Mandeep a chance in this match. 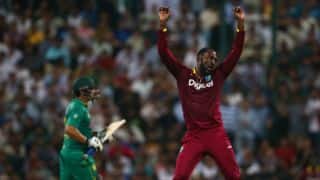 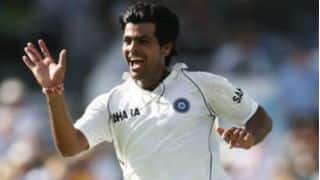