Delhi Capitals spinner Amit Mishra became the second batsman in the history of Indian Premier League (IPL) to be given out for obstructing the field.

Delhi Capitals spinner Amit Mishra became the second batsman in the history of Indian Premier League (IPL) to be given out for obstructing the field.

The incident happened during the Eliminator between Delhi Capitals and Sunrisers Hyderabad on Wednesday when Mishra was given out for obstructing the field in the final over of the nail-biting contest.

With DC requiring two runs to win off the last three balls, Mishra was desperate to get off strike. The leg-spinner, after missing the fourth ball bowled by Khaleel Ahmed, started running for a single. However, realising that he would not be able to finish the run, changed his direction mid-way.

That prompted Ahmed to collect the keeper’s throw and hit it at the non-striker’s end. The throw, however, struck Mishra’s right arm.

The SRH fielders started to appeal straightaway and umpires went for a review. There was some confusion over the review as well, with umpires initially signalling not out after having checked that Mishra had not edged the ball to the keeper.

However, Mishra’s run was later reviewed and he was found to have intentionally blocked the throw with his body.

The wicket, however, couldn’t stop Delhi from winning their first IPL knockout game as Keemo Paul hit Ahmed for a boundary on the penultimate ball to help his team cross the line.

This was the second instance in IPL that a batsman was given run out for obstructing the field. In 2013, Yusuf Pathan was given out for Kolkata Knight Riders against Pune Warriors in a similar instance. 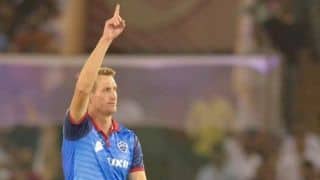