Amit Mishra's glorious form with the ball continued as he ran through the Zimbabwean line-up to finish with figures of six for 48. In the process, he helped India bowl out Zimbabwe for 163 in the fifth ODI at Bulawayo. 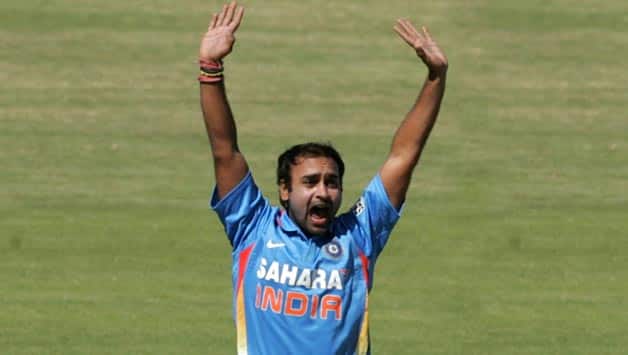 Amit Mishra‘s glorious form with the ball continued as he ran through the Zimbabwean line-up to finish with figures of six for 48. In the process, he helped India bowl out Zimbabwe for 163 in the fifth ODI at Bulawayo.

After being put into bat by Virat Kohli, Zimbabwe were off to a familiar slow start. Kohli brought on Jaydev Unadkat to open the bowling with Mohit Sharma and the latter struck in his second over. Unadkat got opener Vusi Sibanda caught behind in the fourth over to reduce the home side to 13 for one.

Brendon Taylor walked in earlier than usual and joined Hamilton Masakadza in the middle and hoped to build a decent partnership and get a move on. But those hopes were dashed as he struggled to get off the mark and was eventually dismissed for a 11-ball duck. The pressure was getting to him and he gave his wicket away in the process. Looking desparate to get off the mark, Taylor tried to drive a good length delivery from Mohit and a thick edge went straight to Suresh Raina at slips.

Timycen Maruma, playing for the first time in the series, walked out next. He was undone by a poor call from the umpire and had to walk back after being adjuded caught behind when the ball actually brushed his thigh pad on its way to Dinesh Karthik behind the stumps.

Masakadza, however, continued his positive cricket and played his strokes. He began Ravindra Jadeja‘s second over with a boundary off the backfoot and made his intentions clear. However, a couple of overs later, Jadeja had the last laugh when he struck off his first delivery to send back Masakadza. The Zimbabwean opener tried to cut a delivery that was bowled on middle and off and held its line. He missed and the ball went on to crash onto the stumps. At this stage, Zimbabwe were down to 45 for four in the 16th over.

Malcolm Waller then joined Williams to begin yet another rescue act. They added 27 runs in the next seven overs. After showing great amount of patience and concentration, Waller threw his wicket away to a poor short delivery from Mishra. Mishra was brought on for the first time in the 23rd over and he struck first ball as Waller tried to slog his shot ball on the leg side and was caught by Mohit Sharma.

New man Elton Chigumbura and Williams added 50 runs for the sixth wicket and took the total past three figures. At 122 for five in 33 overs, they were looking set to get to the 200-run mark. But a brace from Mishra in the next over jolted the home side. On the first ball after drinks, Mishra trapped Chigumbura leg before and then sent back Tinotenda Mutombodzi off the last delivery. The hosts were now reeling at 126 for seven.

Natsai M’shangwe gave the Zimbabwe crowd something to cheer when he came down the track and slammed a six off Jadeja. Meanwhile, Mishra continued to be the tormentor-in-chief as he got rid of Williams in the following over. Williams fell after a well-made 51.

M’shangwe managed another six, this time off Mishra but gave his wicket away when he tried one shot too many and missed a wrong ‘un in the subsequent over.

A couple of overs later,  Mishra picked up his sixth wicket and wrapped up the Zimbabwe innings at 163 when Brian Vitori edged the ball to Kohli at slips.