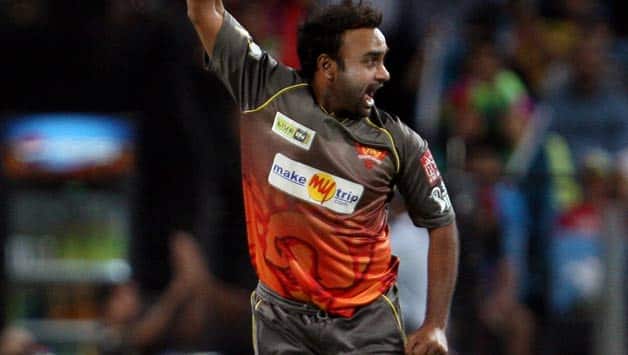 Mishra said he spoke to Mushtaq briefly in New Delhi on April 12 during his side’s IPL match against Delhi Daredevils but he wants to talk to him at length when the two sides meet again on May 4.

“I spoke to him (Mushtaq) for a bit when we played against the Daredevils in Delhi. I am looking forward to talking to him at length about my bowling and leg-spin bowling in general when DD come to play in Hyderabad. I just want to ask him about my flaws and how I can improve as a bowler,” said Mishra who now have three hat-tricks in the IPL.

Mishra is the current IPL season’s Purple Cap wearer as he is the highest wicket-taker (11 scalps) and he also has equalled Lasith Malinga of Mumbai Indians in taking most number of wickets in IPL overall (85 scalps).

Asked what was the secret behind his success in the IPL, considering that T20 is a difficult format for leg-spinners, Mishra said, “My only secret is that I always bowl to my strength. I know and everyone tells me that I am a wicket-taking bowler.

“So, I work more on my wicket-taking skills. I believe getting wickets is the best way to put the pressure on the batting side in the T20 format,” he said.

Mishra said mixing up his deliveries had been his main weapon in the IPL.

“I do bring in a lot of changes. I keep varying the pace, use the googly more often, bowl topspin, flipper, etc. Like that the batsman will not be at ease knowing what’s coming his way. The idea is to keep him guessing.”

Asked what he felt after regaining the Purple Cap from Kolkata Knight Riders off-spinner Sunil Narine, Mishra said, “It feels really great, especially because my performance is helping the team win. It’s fun celebrating your own performance only after you’ve won as a team.

“Whatever hard work I put into my game is paying off here fortunately. In this format you can be taken for runs anytime.

But we have played seven matches and my performance has been good so far. It’s a good feeling to be consistent in this fickle format,” he said.

On equalling Malinga as the all-time highest IPL wicket-taker, Mishra said, “No, I knew I was placed second but it’s good to know that I have equalled him now. The best players from all over the world come together in the IPL and to perform well here is a big achievement for me.”