Hashim Amla slammed a brilliant 251 not out and Jacques Kallis completed his 43rd Test ton as South Africa pummelled England in the opening session of the fourth day's play at Kennington Oval, extending their lead to 129 runs. 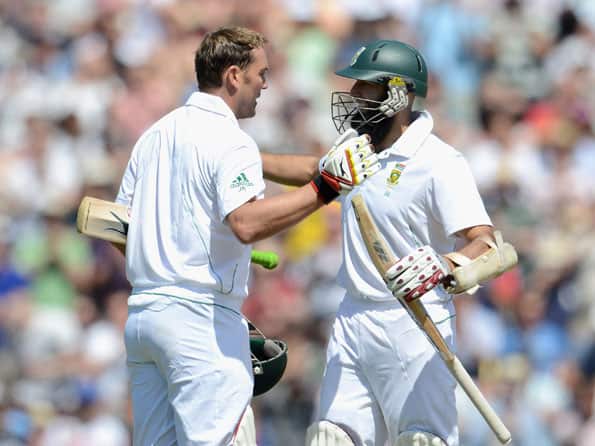 Hashim Amla slammed a brilliant 251 not out and Jacques Kallis completed his 43rd Test ton as South Africa pummelled England in the opening session of the fourth day’s play at Kennington Oval, extending their lead to 129 runs.

Amla and Kallis extended their stand for the third wicket to 254 runs, as England bowlers looked clueless on a sunny fourth day morning.

Earlier on the third day, South Africa were 403 for two at stumps on the end of the third day, ahead by 18 runs in the first innings with Hashim Amla and Jacques Kallis at the crease.

Amla remained unbeaten on a fine 183, which came from 369 balls and 22 boundaries, accompanied by Kallis batting on 82 off 161 balls.

Smith (131) and Amla put on a record 259 for the second wicket and there was no respite for the bowlers as Kallis (82 not out) joined Amla in an unbeaten third wicket stand of 143.

“It was surreal,” said Smith. “A lot of thoughts and emotions went through my head when I reached the hundred but I still had in the back of my mind there was a job to be done. To have played 100 Tests is a terrific achievement and to be able to reach a milestone like this is the cherry on the top. It feels great.”

On a slow, dry pitch, offering some variable bounce and turn for the spinners, Smith and Amla dug in and played risk-free cricket to grind down England’s bowling attack. Their partnership was two runs higher than the mark set by Smith and current coach Gary Kirsten at Lord’s in 2003.

Nuwan Kulasekara to miss remainder of ODI series against India