James Anderson and Stuart Broad ripped through Sri Lanka's top-order to hand England the early advantage in the first Test in Galle. 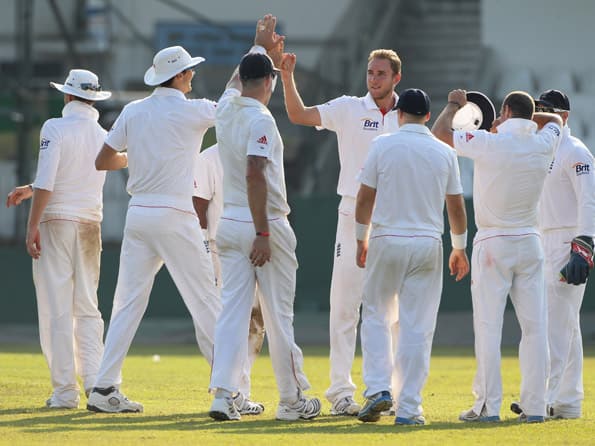 James Anderson and Stuart Broad ripped through Sri Lanka’s top-order to hand England the early advantage in the first Test in Galle.

Anderson claimed two wickets off successive balls and Broad chipped in with a third as Sri Lanka slumped to 15-3 by the fourth over after electing to bat at the Galle International Stadium.

Skipper Mahela Jayawardene (30 not out) and Thilan Samaraweera (19 not out) carried the hosts to 66-3 by lunch on the opening day as the harsh sun dried moisture from the pitch and made batting easier.

The pair have so far put on 51 for the fourth wicket.

Anderson, who had a review for leg-before against opener Lahiru Thirimanne turned down in his first over, removed the left-hander in his second over to makae Sri Lanka 11-1.

Thirimanne hung his bat out to edge an easy catch to Graeme Swann at second slip and give Anderson his 250th wicket in his 67th Test.

The fast bowler added to the tally off the next delivery as veteran Kumar Sangakkara edged a rising ball to wicket-keeper Matt Prior.

Jayawardene denied Anderson a hat-trick with a defensive push, but lost his partner Tillakaratne Dilshan in Broad’s next over.

Dilshan, who edged Broad twice over third-man for boundaries, was caught by England captain Andrew Strauss at first slip as he attempted another wild stroke.

The tourists awarded a Test cap to all-rounder Samit Patel, who will bat in the middle-order and bowl left-arm spin, the third slow bowler in the ranks after Swann and Monty Panesar.

Patel was preferred over Ravi Bopara, who could have played only as a specialist batsman after a side strain ruled him out of bowling in the series.

Would have been icing on the cake to beat India in Asia Cup final: Dav Whatmore