Anderson expects India to bounce back

Anderson expects India to bounce back

England seamer James Anderson expects India to be a stronger side when the second Test starts at Trent Bridge here on Friday after bowling the hosts to victory in the series opener. 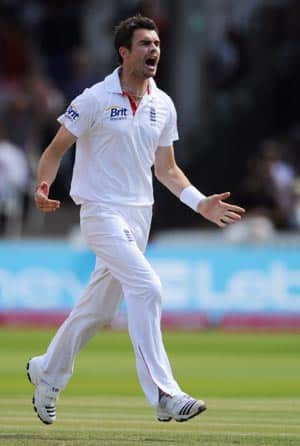 England seamer James Anderson expects India to be a stronger side when the second Test starts at Trent Bridge here on Friday after bowling the hosts to victory in the series opener.

Anderson, 28, took five for 65 in front of a sell-out last day crowd at Lord’s on Monday as India were dismissed for 261 to give England a convincing 196-run win and a 1-0 lead in the four-match series.

“When any team gets beaten they generally come back stronger and have more fire in their belly,” Anderson told Sky Sports on Wednesday.

“All we can do is concentrate on our game, prepare well the next couple of days and concentrate on that first hour on Friday,” added the Lancashire paceman, whose second innings haul at Lord’s included India’s star batting trio of Rahul Dravid, Venkatsai Laxman and Sachin Tendulkar.

Victory at Lord’s left England on course to replace India at the top of the ICC’s Test Championship table, something they will achieve if they win this series by a margin of two matches or better.

However, Anderson warned past efforts were no guarantee of future successes.

“It was a great performance, a great team effort. We did really well to get the win. But that’s gone now,” said Anderson. “We’ve got to hit the re-set button and focus on Friday now.

“Each game is different. We can’t rely on what’s gone on in the past,” explained the Ashes-winner.

“It’s a different game completely and we’ve got to just prepare well the next couple of days and hopefully hit the ground running on Friday.

“We’ve got to try to improve if we can. That’s something we’ve prided ourselves on in the last couple of years — not resting on our laurels but trying to improve and be as good as we possibly can be.”

As for leapfrogging India at the top of the Test rankings, Anderson said: “It’s our end goal, but we’ve got to concentrate on each game and play as well as we can in each game and hope that will be the end product.”

It gives you confidence when Tendulkar pats your back: Mukund