Andre Russell: I was mentally prepared to bat at No. 3

Andre Russell: I was mentally prepared to bat at No. 3

"Coming in at No.3 is as good as coming in as a finisher. I did take a few balls to get going, but once I am in, I tend to go at everything."

Bangalore: Kolkata Knight Riders (KKR) all-rounder Andre Russell has said he was mentally prepared to bat at No. 3 against Royal Challengers Bangalore (RCB) in their Indian Premier League (IPL) encounter. RCB won the match by seven wickets with two balls to spare in a rain-affected match that was curtailed to 10-overs per side.

Russell blasted a 17-ball 45 studded with five boundaries and three sixes to drive his team to a competitive total of 111 for four in 10 overs. But Mandeep Singh’s 45 not out off just 18 balls worked the magic for RCB on Saturday. But Russell said he was happy with his performance.

“Yes, in a 10-over game, coming in at No.3 is as good as coming in as a finisher. I did take a few balls to get going, but once I am in, I tend to go at everything. It was a team plan for me to go in at 3,” Russell was quoted as saying by iplt20.com on Sunday. “Given the situation of the game we discussed after a couple of overs that I am going to bat one-down. I was ready and mentally prepared.”

When asked if it was tough for him to plan for a 10-over innings, he said, “For me it is not because I am a big hitter of the ball. I know that once settled I can hit them long. So, it really wasn’t a hard decision.” The West Indian said as a bowler one should be mentally prepared to bowl in any situation in the T20 format, as one gets very little time to prove himself.

“You have to be mentally prepared and very tough. Bowling two overs is not easy because you do not get a chance to make a comeback after you have been hit. You bowl a good ball and get hit for a six because the batsmen swing their bat at everything. What can you do? You just have to keep your chin up, back yourself and think about the next delivery,” the 27-year-old added. 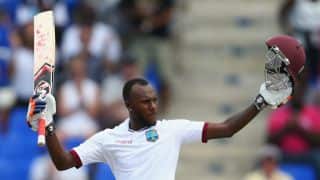 Jermaine Blackwood: West Indies focused on wrapping up England early on Day 3 of the 3rd Test at Barbados